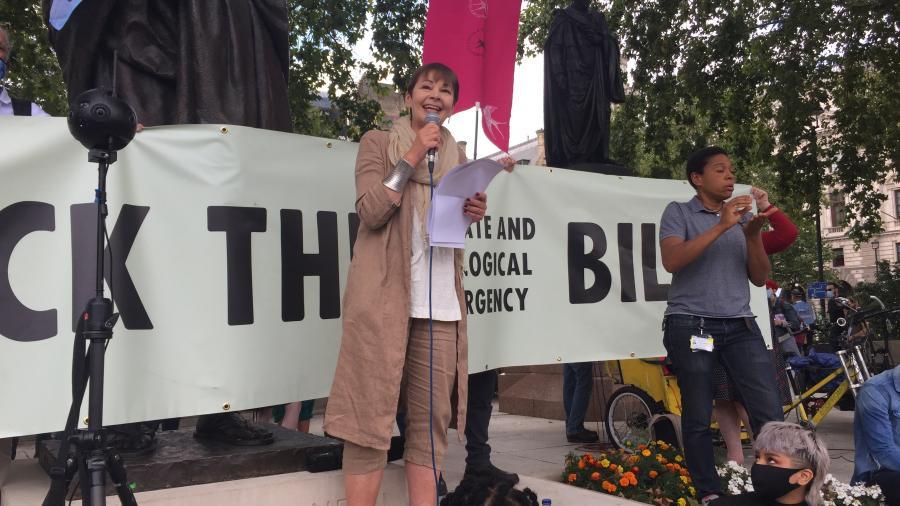 At the start of my Christmas newsletter last year, I said it had been a tumultuous year in politics. It’s hard to believe that 2020 has been even more extraordinary in so many ways.  It is a year I think none of us will ever forget.

For too many, it is the year when they lost someone they loved, or saw their precious business forced to close, or lost their job or home.  It has been an incredibly difficult time when it’s often been hard to stay optimistic about the future. But I have always believed that the inclination to goodness in hard-wired in people and we saw so many examples of that this year, with organisations like the Brighton & Hove Food Partnership and mutual aid networks pulling together to support the most vulnerable in our city. We must try to hold on to that sense of community, and the way people and neighbourhoods came together in compassion and solidarity, as we face the challenges of 2021.

My work as your MP (often taking part in parliamentary sessions via video link) has been dominated by the Coronavirus crisis: holding the Prime Minister and government ministers to account for their response; challenging the access to vital PPE supplies for hospital and care staff; supporting people trying to get home in the early weeks of the crisis; raising concerns with the Prime Minister over the failing test, trace & isolate system; campaigning for better support for businesses impacted by the crisis; pressing ministers to support the 3 million self-employed and small company directors who’ve been unjustly excluded from support schemes and securing a backbench debate on the issue; supporting arts and cultural venues in their campaign for funding to see them through the crisis, and more.

This has been an unprecedented challenge which any government would have struggled with. But the performance of this Prime Minister and his Cabinet has been dire. The response to infection rates has been too slow, scientific advice has been ignored, public messaging has too often been confused and public money has not been well-spent. The Dominic Cummings episode in May was shameful – I have seldom seen such an angry response from constituents who had made difficult sacrifices themselves, and seen that thrown back in their faces.

THE IMPACT IN BRIGHTON AND HOVE

My inbox has shone a light on the huge range of difficulties that coronavirus has caused for people in the constituency: accessing Covid tests and trying to get a prompt result, attempting to get financial support, accessing food and basic provisions, and more.

I have had regular (virtual) meetings and updates from the local public health team and others, hearing about, and responding to, the early struggles they had to acquire PPE, the impact on care homes in the city, and the challenges of trying to maintain social distancing measures when the lifting of restrictions and warm sunny weather brought thousands of visitors to the city, and packed out the beaches. I have also talked to many small businesses, particularly in the hospitality sector, and heard of the devastating impact the lockdowns and other restrictions have had on them. I have consistently pressed the Chancellor for more support on issues like an extension to business rate relief, the easing of VAT in the tourism sector, help for the arts and support for the self-employed.

The Government’s procurement process for Covid-related contracts is a real cause for concern. Huge sums of public money are involved, there is a worrying lack of transparency and the “fast track” for suppliers with links to the Tory party are especially disturbing. I am taking legal action, together with two other MPs and the Good Law project, over this scandal. Most recently, we wrote to the Health Secretary asking him to explain who benefitted from this “fast track” process, and why the companies involved were chosen.

LEARNING THE LESSONS OF THE PANDEMIC

The Prime Minister has made only vague commitments about an inquiry into the Government’s handling of Coronavirus. But it’s clear lessons need to be learned now. As vice-Chair of the All-Party Group on Coronavirus, I heard the views of a wide range of people from epidemiologists, local authority leaders and patients and their families.  Our report listed 44 recommendations, starting with the need for a clear exit strategy that recognises that by saving lives, we also safeguard jobs and the economy. We also called for local public health teams to lead on tracing operation, since all the evidence suggests that’s far more effective than ever more centralisation.

While Coronavirus has rightly grabbed most of the headlines, and much of my attention, I have also been working hard to address another emergency we face – the climate and nature crises.  At the beginning of this year, I attended the first meeting of the UK Citizens’ Assembly on climate in Birmingham. It brought out its final report in September, coming up with a raft of brilliant ideas and showing the public appetite for strong climate action from the Government which it just isn’t delivering.

In early September, I tabled the Climate & Ecological Emergency Bill, which sets out a pathway for meeting the temperature goals of the Paris Agreement, protects nature and biodiversity and provides a critical role for citizens in how we transition to net zero emissions, as we must.  My Early Day Motion in support of the Bill continues to gain support.

The Bill is backed, among others, by Extinction Rebellion, who brought their protests to Parliament in support. I caught up with some of them in Parliament Square, and later that day joined an amazing line-up of artists including Sir Mark Rylance, Zadie Smith and George Monbiot in a Writers Rebel event outside the offices of the Global Warming Policy Foundation which, with other right-wing think-tanks, lobbies against effective climate action.

OUR FUTURE AFTER CORONAVIRUS

I believe Coronavirus has changed us as a society, but there is the danger that as soon as the crisis has passed, we will go back to business-as-before and the need to fire up the economy will over-ride the need to transition to a better, sustainable future. We need to use this moment to pivot to a different way of running our society and economy.

In May, I started a campaign called Green Steps to Better which set out the initial steps we should take to build a better, fairer and greener society after Covid.

As co-chair of the all-party parliamentary group on the Green New Deal, I spent much of the summer on a project called Reset, talking to people across the country from members of the public to scientific and economic experts, about building back better from Covid.  Our report was full of recommendations on how the Government could build a fairer, greener UK, creating more than a million jobs in the process.  It also showed the public are way ahead of ministers on the scale of change they want to see when we emerge from this pandemic.

THE WELLBEING OF FUTURE GENERATIONS

I am sponsoring this important bill, alongside the Big Issue founder, John Bird, and introduced it in the House of Commons in March.  Its aim is to put the wellbeing of future generations at the heart of all policy-making, giving them a voice in today’s decision-making. Among the proposals are a duty on Government to publish national indicators that measure progress towards wellbeing goals and a duty on all public bodies to balance the needs of the present with those of the future.

I have been campaigning for a change in the rules on housing allowance for homeless young people under 25, and for care leavers, securing a Westminster Hall debate about the discrimination against young people who get a much lower rate of housing benefit than those over 25. Young people leaving care, who are especially vulnerable, can initially claim the higher rate but then lose it on their 22nd birthday – a loss of £330 a month in Brighton and Hove. I am glad the Government recognised the inequity in this and is making changes, but is not doing so for three years.

LEGAL ACTION OVER THE RUSSIA REPORT

When the Russia Report was finally published in July, it revealed very disturbing evidence of likely Kremlin meddling in the UK’s electoral processes over the past six years. Yet it’s been brushed aside by the Prime Minister who is refusing to investment further. Many of us disagree which is why I and other MPs, together with a non-profit organisation All the Citizens, are taking legal action over this response.

BREXIT AND THE AGRICULTURE & TRADE BILLS

Businesses are not only having to deal with Coronavirus - many are also having to prepare for the end of the Brexit transition period 31 December.  Yet at the time of writing, they still don’t know exactly what they're meant to be preparing for.

Two major pieces of legislation have been working their way through Parliament this year, which are supposed to ready the country for Brexit: the Trade Bill and the Agriculture Bill.   I spoke several times in the debate on the Trade Bill, trying to protect the NHS from back-door privatisation in any trade deal, and ensure environmental and social protections were maintained.  I also spoke in the opening debate on the Agriculture Bill, which will shape food and farming for a generation or more.  While its headline aspiration of linking public money to public goods is welcome, it does little to address important issues like pesticide use, the need to transition to agroecology and the role of farming in tackling climate change.

A new GCSE in Natural History is a cause that’s been close to my heart for several years, after first hearing about the initiative from the naturalist and writer Mary Colwell.  It’s now come a step closer after a consultation process by the exam board which is backing it. I hope it will offered as part of the school curriculum from September 2022.

I was hugely honoured to be given two awards this year.  I was the first recipient of the Judges’ Special Recognition Award in the Patchwork MP of the Year awards, which recognise MPs’ work for disadvantaged communities.  And I was among 30 amazing women activists, educators, campaigners and doers who were named on BBC Radio 4 Woman’s Hour’s “Our Planet Power List”.

It was a real delight, and a welcome relief from politics, to curate an exhibition at the Towner Gallery in Eastbourne.  The exhibition was called Brink – a name inspired by one of the exhibits – reflecting my belief that we are on the brink of a different world with the loss of so much nature and wildlife.  It received quite wide coverage, including in the Apollo arts magazine.  I hope some of you were able to go along and see it.

I’ve spoken or written about many of these issues over the year, appearing on BBC, Sky and C4 news programmes as well as local news outlets.  I’ve also written for the Independent, iNews, New Statesman, Daily Mirror, Huffpost and others and have a regular column in the Metro. Thank you to all those who follow me on Twitter, Instagram or Facebook.

I wish all of you, and your loved ones, a happy Christmas, and send all my best wishes for a better, brighter 2021.