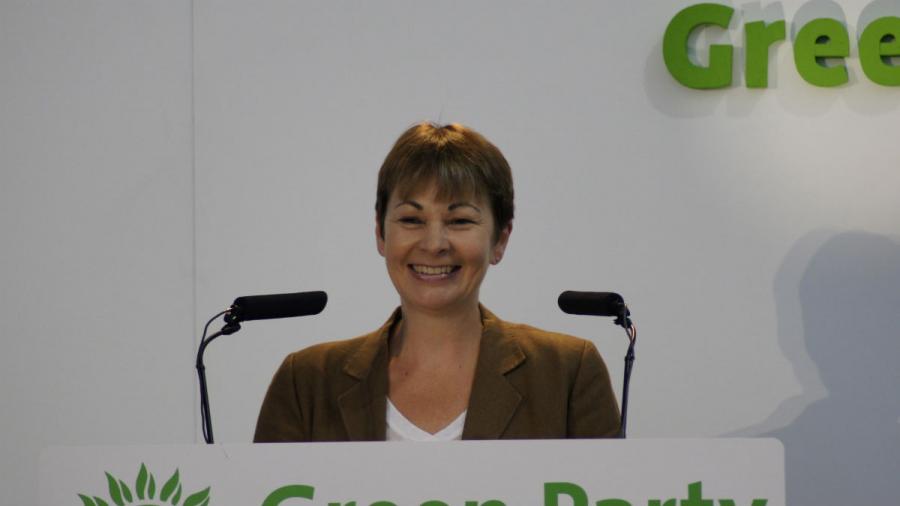 Caroline's conference speech (Full Text): 'Why Parliament needs a Green voice'
Sunday, September 7, 2014
‘From campaigning for rent controls and more affordable housing to standing up for a genuinely public national health service; it's the Greens who are taking the fight to Government’
Conference, welcome to Birmingham.
We meet in exciting times.  Over 1.2 million people voted Green in the European elections – meaning we not only held our seats in London and the South East, but also won a new seat in the South West.  Huge congratulations to our newest MEP, Molly Scott Cato.
Congratulations are due closer to home as well.  Here in the West Midlands, the Greens have achieved some brilliant successes, with 25 Green councillors sitting on 10 councils in the region, and where we now form the official opposition in Solihull.
With approaching record party membership, and an increasing number of polls showing us neck and neck with the Liberal Democrats, we have everything to play for.
Conference, it is a huge pleasure and privilege, as always, to have an opportunity to say a few words.
And such a contrast to my duties speaking in Parliament.
It’s not just the audience that's different.   Though I’m assuming George Osborne isn’t here today…is he?
After four years at Westminster, people often come up to me now and ask whether I've got used to it...
Used to it?  The weird and wonderful traditions that make it a cross between Hogwarts and a Gilbert and Sullivan Comic Opera?
The barracking and routine dishonesty?
The way the lobbyists for the energy companies and arms companies swan around, knowing they’ve practically bought the place?
I can reassure you, Conference, that, no, I have not got used to it.
But I do know one thing. Being there matters.
So what I want to speak about today, very briefly and very specifically, is the importance of keeping our seat in Parliament.
Because it is the Green Party which is the true opposition at Westminster.

And let’s take the NHS, because Labour put themselves at the heart of the campaign to protect our health service against the Coalition’s plans.
They said all the right things.
But Conference, saying and doing are very different things.
And when you look at what Labour have done it makes no sense to trust them to protect the NHS.
Labour have been complicit in imposing privatisation and market principles on our NHS.
They may have agreed to reinstate the Government’s legal duty to provide, but we know they won’t abolish competition or the purchaser-provider split.
Conference we need to restore the NHS in England. Re-establish public accountability and reverse more than two decades of policies which have been intent upon privatising NHS services and funding, ultimately to its demise.
Only the Greens can be trusted to stand up for that in Parliament and only the Greens are honest when it comes to keeping the NHS public.
So I am backing a new NHS Bill, developed by NHS campaigners, which would rebuild our health service from the bottom up, and would undo the damage done by successive governments.  Putting the public back at the heart of our health service.
On the NHS, as on so much else, the truth is, Labour just don’t have what it takes to form a real opposition.  To take on the Establishment.
The Tories have David Cameron and George Osborne. Whatever you might think of their policies or their values, they are professionals to thing fingertips. And they’re working hard for their clients – the bankers, the big landowners, the multinationals.
And Labour have Ed.

And it’s because we offer a better alternative, that Labour is spending its time trying to kick us off the pitch.
Ed Miliband has us in the top 20 hit list of targets seats.
Not Cameron.  Not Osborne.  No, he wants to spend the extra cash on fighting us.
So we have two fights on our hands. One against the Conservatives and their Lib Dem accomplices.
And one against Labour.
Things are also very different to 2010 – the fight to form the next Government will be even closer.
We can do it again but it will be even harder this time.   And we can only do it with your help.
One other thing is different this time.
Then, we were chasing a dream.
Now, we have a huge responsibility on our shoulders.
But we also know what a huge difference we can achieve.
In 2010, I said that it showed that in politics, if you trust the people, you can stick to your principles and still get elected.
In 2015, together, we’re going to do the same.