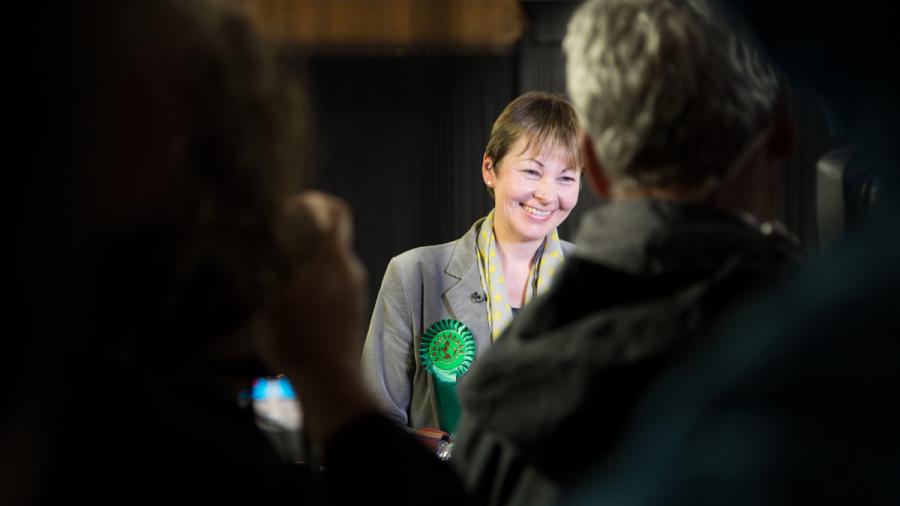 Caroline: cross-party progressives must work together
Saturday, May 9, 2015

Until we get PR, we should consider case-by-case electoral pacts to ensure progressive vote is not divided

CAROLINE will tonight call for an urgent debate on political reform.

She will call on progressives from across parties to find a way to work together to achieve political reform, following the bleak blue wash of Thursday’s election.

Caroline will call for the move at a sold out, 400-strong debate tonight at the Brighton Festival. Election 2015: How was it for you? will be chaired by Polly Toynbee, and director of Liberty, Shami Chakrabarti, will also speak.

Thursday’s exit poll and election results has reignited the debate about proportional representation, which Caroline used her winning speech on Friday morning to highlight.

However, she will add – in the absence of a fair voting system – those on the left must urgently find a way forward together to ensure a strong progressive opposition to destructive and divisive Tory rhetoric and policies.

Caroline said: “The election results have served as a stark reminder that our political system is broken. The time for electoral reform is long overdue. Only proportional representation will deliver a parliament that is truly legitimate, and that better reflects the views of the people it’s meant to represent.”

She added: “But we must move forward today. While the campaign for electoral reform gathers momentum, those of us wanting to see a fairer, more compassionate and progressive politics must find new ways of working together, a new way to do politics – and put that into practice now.

“Unless we break free of tribal politics and work together to fight austerity, and promote crucial, common-sense climate policies, we’re faced with an incredibly bleak political future. For the sake of all those who’ll suffer most at the hands of the Tories, we must rethink our relations and recognise the importance of our common ground.

That should include shared platforms and case-by-case electoral pacts, to build a strong progressive alliance to challenge the Tories over the next five years.  Clearly in Wales and Scotland, where there are PR elections for the Welsh Assembly and Scottish Parliament, this doesn't apply, but where First Past the Post continues to distort election results, it should surely be considered.

“And one of the first challenges such an alliance will face is ensuring we win the referendum on membership of the EU.  While we certainly support urgent EU reform, we cannot allow backward-looking Tories to make common cause with UKIP and lead us out of the EU and into the wilderness."