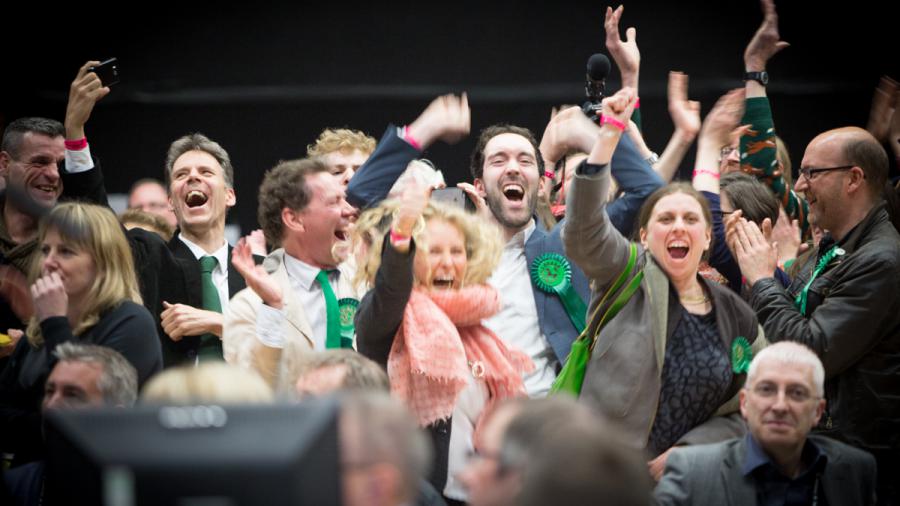 YOU HAVE OUR VOTE! SECOND TERM AND INCREASED MAJORITY FOR FIRST GREEN MP CAROLINE

Caroline says: ‘In Parliament and our communities, we will stand shoulder-to-shoulder with those who need support’

CAROLINE has been re-elected for a second term as MP to Brighton Pavilion.

“In 2010, Brighton Pavilion showed that a different kind of politics is possible. That you can stand firm by your principles and still be elected.

“And in re-electing me tonight Brighton has made history again. I couldn’t be more proud to be an MP of this wonderful city. I’m completely honoured to be able to represent it again.

“Tonight is the result of so much work, by so many people, over so many weeks, months and years.

“But there’s not a moment to lose. Amid the most savage, targeted austerity cuts in modern history, and with Parties set on wringing 'every last drop of oil' from the North Sea, even as climate change accelerates - the urgency of a strong, clear Green voice in Parliament has never been greater.

“A voice to stand up for families who are being pushed to the edge - and over it. To press for urgent climate and social justice, now. To say we should take care of the disadvantaged, not scapegoat them. To stand up for affordable housing, and truly public, properly protected NHS - with patients back at its heart. On opposing the economically-illiterate austerity narrative. Standing against Trident and Fracking. Getting railways back into public hands. Exposing the preventable scandal of cold homes.

“In Parliament and our communities, we will stand shoulder-to-shoulder with those who need support.

“We will hold Parliament to account and push for real reform – starting with proportional representation, for a politics that looks far more like the people it’s supposed to represent.

“And we’ll fight for a fairer, greener future – and justice today.”

Caroline added: “I’m disappointed, of course, not to be joined on the benches by some more Green voices. But more people voted Green than ever before and I'll be campaigning in earnest for electoral reform, so in future those votes translate into representation. It’s time for change – for a politics that better reflects the people, a politics that is a transparent, accountable and truly representative public service.”

With thanks to James McDonald for the image: www.silverfoximaging.co.uk