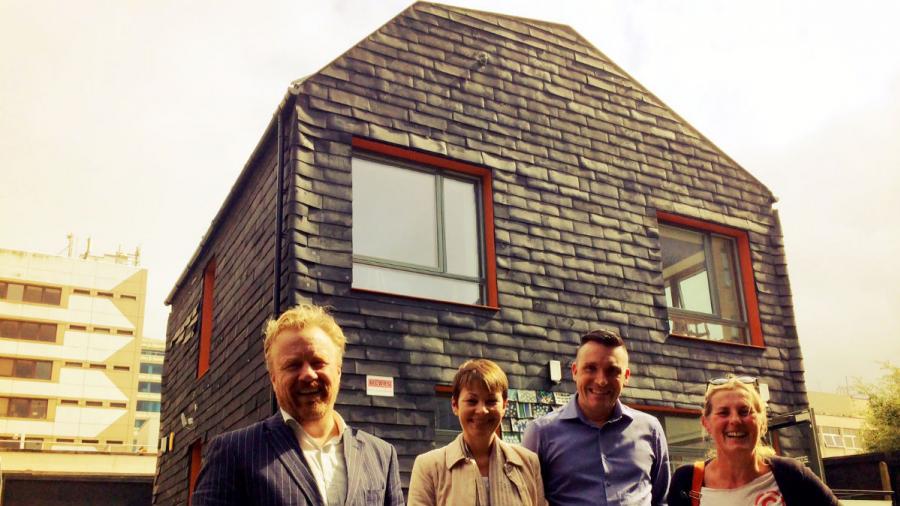 Brighton’s Waste House
Friday, August 29, 2014
I visited a house with a difference yesterday – the Waste House at Brighton University, a “collaborative eco-build project” that’s turning local waste into a resource
Also called “the house that 20,000 toothbrushes built”, the Waste House is Europe's first permanent public building made almost entirely from material thrown away or not wanted.
Construction materials include carpet tiles as external cladding, two tonnes of old denim jeans, VHS cassette tapes, inner tubes and broken polystyrene packaging.
Some of the toothbrushes mentioned above were thrown away after single use by business and first class passengers flying from Gatwick, others came from local residents (one of the toothbrushes was once mine). They’re all now in the house’s wall cavities, helping with insulation.
As a result, there’s ongoing low energy use now that the house is completed, alongside the low energy use while it was constructed.
Effective insulation plays an important role in energy efficiency, which helps to reduce fuel poverty, so in my Housing Charter I’m calling on the Government to introduce tougher minimum energy efficiency standards.
Crucially, the Waste House demonstrates that higher standards right across the construction sector are achievable.
It highlights that these make economic as well as environmental sense: at present, for every five houses built in a conventional way, so much waste is produced that if re-used it would be sufficient to create a whole new extra house.
The project’s trail-blazing status was recognised at this year’s 2degrees Champions Awards where it won in two categories - Waste & Resource Management and Building or Property Project.
These are fantastic achievements and I’d like to congratulate everyone involved.
The Waste House is firmly rooted in education, inspiration and training. Over 750 pupils from local primary, secondary and tertiary colleges have visited the site, while students and apprentices from City College and Mears Group have also had the opportunity to work on the house as a live construction project.
For more on the Waste House see http://bit.ly/1lkhN2A or @WasteHouse
Image, L-R: Duncan Baker Brown (University of Brighton and BBM Sustainable Design), Caroline, James Cryer (Mears Group), Cat Fletcher (Freegle)