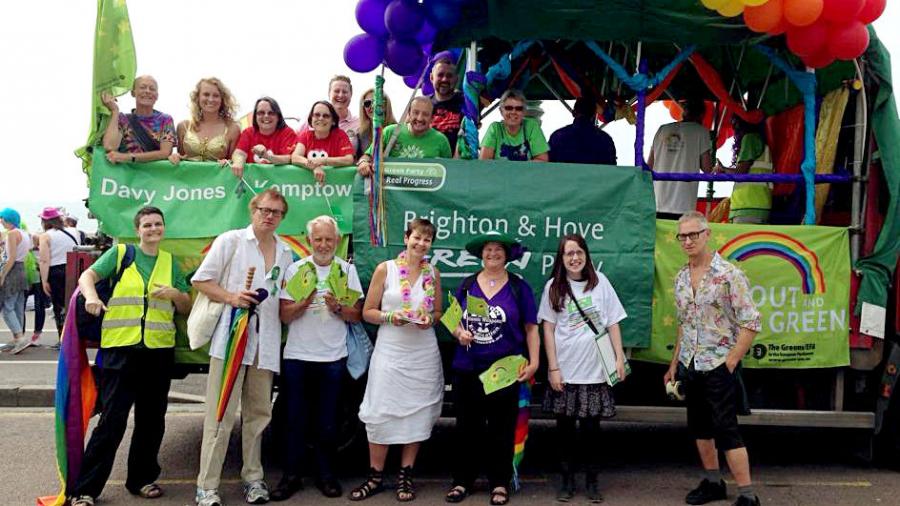 Brighton and Hove Pride 2014 "Moving" to join parade and "to hear applause for equality along the route"
Saturday, August 2, 2014
Caroline and Green party members partied with a serious message at the city's annual Pride celebration this weekend
Caroline reflected, "Joining the Pride 2014 parade was very moving - and to hear the applause for equality all along the parade route."
"Thank you for the great welcome and support on Saturday."
"Pride is enormous fun. It’s also enormously important. It’s an opportunity to say - loud and clear - that LGBTIQ rights matter. That LGBTIQ rights are human rights."
"We have a great deal to celebrate this Pride. We stood up for the freedom to marry and now, at long last, we have that freedom. But other freedoms elude us still."
"Pride is about standing up for equality and the freedom to live for all in Brighton and Hove, and around the world."
Alex Phillips, councillor for Goldsmid and council LGBT champion led the celebrations on the Green Party float and described the experience:
"It's the most amazing feeling up there, looking out on tens of thousands of people from Brighton and Hove and indeed across the country coming out to celebrate equality. The energy is something else!
"In this country we have come a long way when it comes to LGBT rights, but there is always more work to be done. Greens were first to call for changes in the law to allow gay marriage and civil partnerships. At the moment we are running a campaign for equal blood donations as well as for a gender clinic to be established in the city.
"With our policies, which have always led the way on equality - even at times when it may be controversial - it's no surprise that we have more LGBT councillors than any other party and we continue to blaze a trail on LGBT rights both nationally and locally."
Besides celebrating LGBT freedom here, local Green politicians and activists were keen to show solidarity for the wider cause of sexual equality and freedom around the world.
Councillors Stephanie Powell and Ruth BuckleyStephanie Powell, councillor for Queens Park, said, "Freedom To Live, the campaigning theme for this year's Pride, is as important today as at any other time in history.
It was made more poignant by the number of placards that were visible at yesterday's parade, reminding us all of the 78 countries (including 42 out of 53 Commonwealth member states), where being LGBT is actually unlawful.
"These are stark and painful reminders that being LGB or T isn't so great if you happen to live in one of these places. How horrendous to think that one's human right to fall in love could quite possibly threaten your liberty, or cost you your life. In this day and age, it is unthinkable. Yet it's true for many 1000s of LGBT people all over the world.......
"Pride is an important day in the city's calendar. It's a wonderful celebration of diversity, but it's also a clear reminder that acceptance is global, and is the key to harmony & peace amongst all."