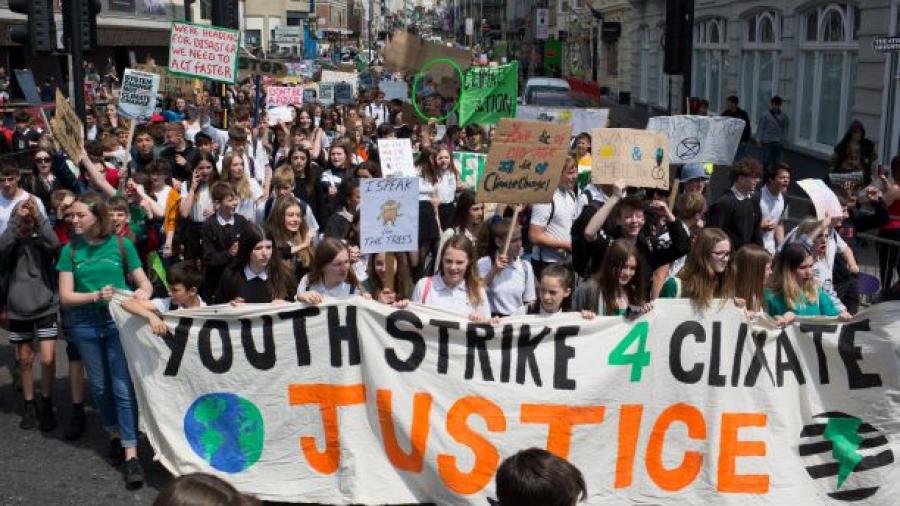 I was delighted to join the latest youth climate strike in Brighton on Friday. Hundreds of young people gathered at Churchill Square with their brightly painted posters and banners, demanding that their fears for the future are heard, and that politicians and decision-makers take urgent action to tackle the climate crisis before it’s too late.   They’re right to be concerned.  The Intergovernmental Panel on Climate Change is very clear: we need to halve global emissions in the next decade if we’re to have any hope of avoiding the collision course we’re on with climate catastrophe.

Later in the afternoon some Dorothy Stringer pupils attended my weekly surgery to deliver a stack of letters written by many of those who made the decision to miss lessons and take part in the strike.

Each letter explains why the student chose to take this action, with many detailing their hopes and fears for the future, and very importantly, the need for young people to be heard because it’s their future that is at stake.

The movement, sparked by the action that Swedish activist Greta Thunberg began, is inspiring to see. The momentum is building, and as a politician and campaigner who has tried to get governments to wake up to the urgency of the climate threat for many years, I’m so encouraged and impressed that young people in Brighton and Hove, as well as elsewhere, are so passionately refusing to remain silent and so determined to force change.

The strike at Churchill Square was a high profile mass action by a group of people coming together to make a difference – and they are.  In contrast, the letters from Dorothy Stringer students are much more individual and personal, and I have been moved by many.

I’ve made clear my commitment to the students I’ve met with today, both at the strike and at my surgery, that I will continue to do all I can to make change happen.   Parliament has now declared a Climate Emergency - but words alone are not enough.   Urgent actions need to follow - business as usual is not an option.   That means that the Government needs to stop promoting the expansion of aviation, forcing fracking on local communities, and shutting off support for onshore wind and solar, and instead introduce a Green New Deal - a 10 year transformation of the economy, with a major investment in green energy and energy efficiency, greener transport options and sustainable agriculture.  I will do my best to ensure that messages from the letters I’ve received, and from the strike today, are heard loud and clear in the House of Commons, so young people get the political leadership they deserve.

Copied below are quotes from some of the many letters I received from Dorothy Stringer pupils today:

This is our future they are jeopardising.

I’m very worried about future generations not having a world to live on just because old generations not opening their eyes and acting on some of the most deadly situations that we’ve ever faced.

I want it to be my generation to be the ones who saved the planet.

I am very worried about pollution because I love animals and in particular sea creatures and we are destroying them through too much plastic getting into the sea, trapping animals such as crabs in plastic cups, turtles getting wrapped up in plastic fishing rope and fish ingesting micro plastics which are now getting into our food chain as well. It needs to stop.

I would like to create a future where all the damage happening right now stops and we start to respect and take care of our planet.

I would like all politicians to hear our voice, respect our action and not question our motivation.

I made the strong choice to miss school on so that I could attend the strike over climate change protest on Friday because I believe that we are ruining planet Earth and causing climate increase by living the privileged lifestyles we lead.

I thought that if I attended it would help create a bigger movement to let my generation live a longer life.

I want to fight for my future.

I do not want to see any more animals go extinct due to human activities.

It can’t be called a crisis if we don’t treat it like one.

I want to be able to live on a healthy planet, I want to worry about normal teenage things, like my education and friendship problems, discovering who I am as an individual. That does not include having to deal with taking power of a situation because the people in power can’t.

It is only by being disruptive that we can get anyone to pay attention.

At this moment in time I am trying to do my best to do what is best for the earth.

I would like people to change their lifestyle so that in the long term it will have a positive effect on our planet, for example, I would love it if people were to all have solar panels if they can afford it, and if they can’t, they should be provided by the government.

I am very worried about how ignorant some members of parliament can be and how inconsiderate the people that we place in power are about the environment.

The government need to pay more attention to my generations future world.

I am very worried about growing up in a world where the damage is irreversible because the government didn’t try hard enough or pay attention.

I would like the people in power to try harder.

As a planet we need to put all the effort that is humanly possible into turning this train wreck around. We cannot keep denying and ignoring the facts that are metaphorically and literally right in front of us!