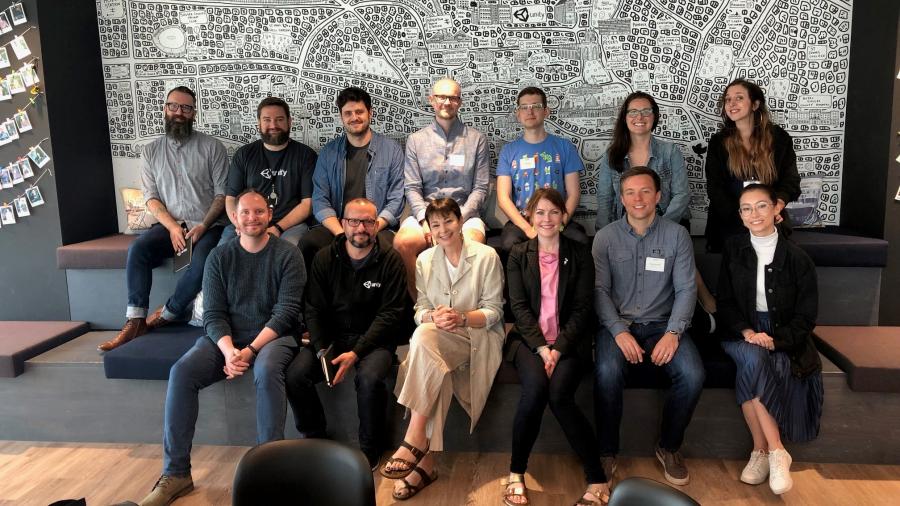 The games industry in Brighton

I spent a fascinating morning at Unity Technologies with local games and education companies.  It’s a huge industry in Britain, worth around £5.7 billion.  There are several creative clusters around the UK and Brighton is one of them, home to nearly 80 games companies, from international organisations to small start-ups.  There’s plenty of home-grown talent such as the Chinese Room who developed the Dear Esther video game which was nominated for five awards, and PaperSeven, shortlisted for BAFTA’s British Game.   There was much discussion about the huge significance of the industry and the opportunities it offers - particularly in the field of education - and also about some threats, predictably, from Brexit.

I joined Lloyd Russell-Moyle on a panel for a youth question time as part of BFest, a youth arts festival run and led by young people from Brighton and Hove.  Some great questions came up on issues like climate change, misogyny and teaching politics.

I visited Sussex University to talk to the Director of Student Experience about students’ mental health. I’m concerned about students who may fall through the net because their problems are too serious for the university to deal with, but not serious enough for services like the local authority or NHS to step in.   I know this is an issue the university takes seriously, and it is reviewing its processes over students’ well-being.  I was encouraged to hear that some practical changes are happening e.g. over ensuring that if a student has pre-existing mental health conditions, that information can, with their permission, be passed on to local health providers so there’s greater continuity of care.  Ultimately, though, there needs to be greater capacity in the community to respond to increasing numbers of people presenting with mental health concerns, and greater resourcing will be key.

I was delighted to meet with Ella Daish and to get an update on her campaign for plastic-free periods.  I completely support her aim of greening the procurement process for the government’s new initiative to ensure schools offer free sanitary products to those who need them and will be raising this both locally, with the Council, and nationally.

I caught up with another inspirational campaigner, Carly Barton, who is keeping up the pressure on government to ensure that medicinal cannabis can be accessed by those who need it.  It’s a scandal that so few prescriptions have been issued, despite the change in the law.  Carly’s campaign rejects a system whereby patients are criminalised for consuming a medicine that they legally qualify for, simply because they cannot afford to buy immunity.   The campaign would see those who meet the legal requirements for a private prescription growing their own safe supply in a transparent way.  Carly’s plants were removed from her secure location by Sussex Police, in spite of the fact that she has been in receipt of both a private and an NHS prescription.  Two pain consultants with a combined practice history of 35 years have recommended that it is in her best interests to continue with CBMP, and she has committed to growing publicly, securely and responsibly until such time she can access her medicine by prescription.  Her campaign is backed by the Police Federation - more here: https://www.carlysamnesty.org

Although parliament was in recess last week, I raised two written questions, firstly concerning Britain’s nuclear deterrent and the Dreadnought programme, which the Government is proceeding with as a successor to Trident. There have been a number of safety issues with this programme and spiralling costs – now over £200 billion, enough to build 120 state of the art hospitals and employ 150,000 new nurses.  Even some defence analysts are questioning whether Dreadnought is needed for Britain’s defence needs.  This makes it essential that Parliament has a vote on the programme.