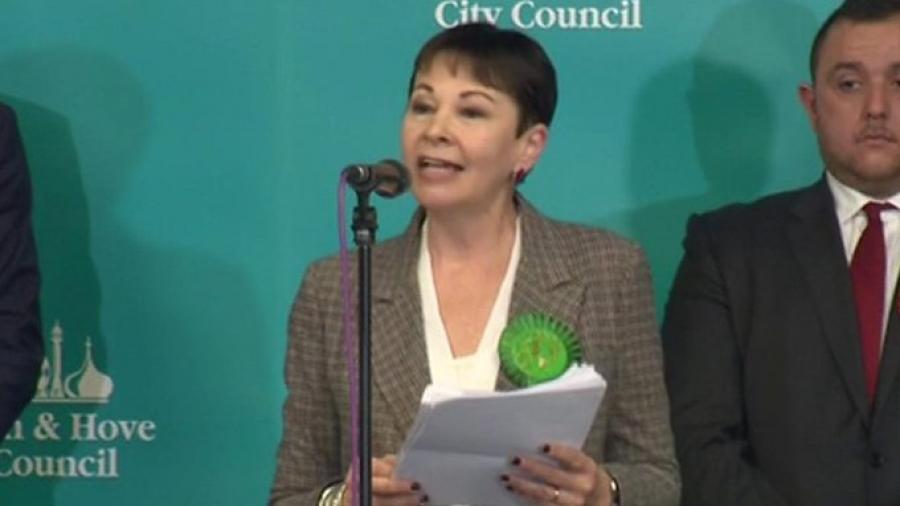 A huge thank you to all the candidates, the staff here this evening and to the amazing team who worked on the Green campaign.

And sincere and heartfelt thanks to the people of Brighton Pavilion who have once again granted me the honour of representing them in Parliament.

I feel incredibly proud that my majority has increased because it demonstrates that Brighton Pavilion continues to believe in compassion, justice and a bigger future.

And our whole city believes in that too. If we cannot have 3 Green MPs representing Brighton and Hove in Parliament then the next best thing is going back there with Peter and Lloyd to defend the values our city holds dear. And they are going to need defending over the next five years.

The pride I feel this morning is muted by feelings of desperate sadness and deep anger.

Sadness that so many people who desperately need a progressive government on their side won’t get the social justice they need. The homes they need, the living wage, the good public services and the security to build a future.

This election should never have happened. Parliament was on the brink of supporting a People’s Vote on Brexit and 2 out of your 3 MPs warned an election would only drive the country further apart rather than bringing us back together.

The status quo in this country is intolerable and we are now on course for it to become even more so.

Which brings me to feeling deeply angry. Angry that our political system is so badly broken and is still letting individuals and our country down so badly. It has been doing so for decades. It has locked out millions and ignored their voices for years. We are now paying the price for this. And it’s our children and the climate that will pay the highest price of all.

This may well have been a Brexit election but it was also the Climate Election and I am determined to make this the Climate Parliament. To keep the Green New Deal at the top of the political agenda. That is what the science demands, it’s what our children striking for the future demand. And it’s what the people of Brighton Pavilion demand.

That task will be significantly more challenging with a Prime Minister who has taken millions of donations from climate deniers. The scientists have warned that the next 18 months are critical if we are to avoid runaway climate chaos. Yet Britain will likely spend them continuing to wrangle over Brexit as we hurtle towards crashing out with no deal, as has always been the preferred destination of the extreme wing of the Tory Party that’s now hijacked the country.

We need to ask ourselves how this has happened. But those of us who call ourselves progressive do a massive disservice to a better politics that lifts us all up if we continue to focus on what divides us. We need to regroup and rebuild. Not indulge in bitter recriminations and blame games.

And we need to recognise that we are condemning the country to potentially decades of vindictive Tory cruelty if we don’t all join forces to create an unstoppable momentum for a voting system in which every single vote counts, every single time. This isn’t about gaming who has more to lose or more to gain. We all lose if the rising youthquake that voiced the hopes of a new generation is silenced before it can really start to sing. We all lose if the truth no longer matters.

And we all lose if our democracy is not the best it can possibly be.

This election has been called historic for many reasons already but we are making history all the time. The distress, anger and sadness millions of us feel this morning about the national forecast could be the catalyst for transforming our politics for good, forever – that’s how we make this election the start of something truly historic and that’s how we light a much needed candle in the darkness.