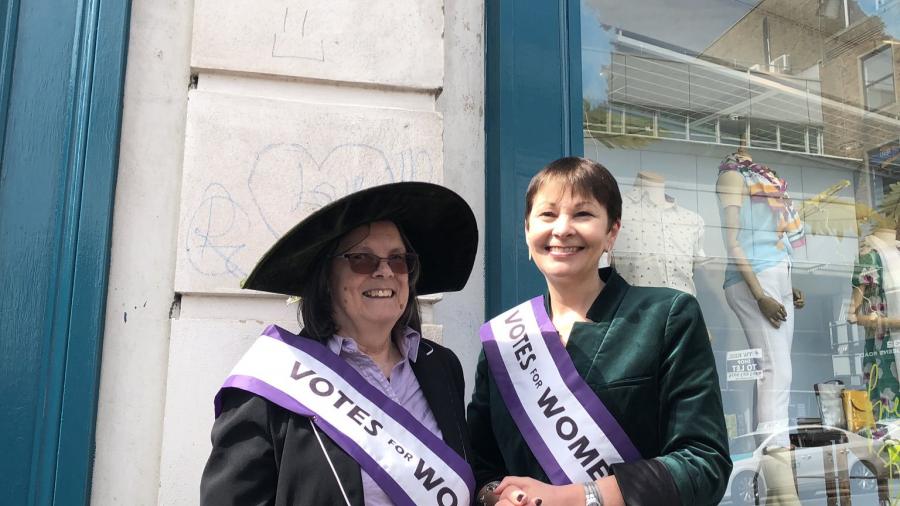 Remembering Suffragettes in Brighton and Hove
Thursday, May 16, 2019

On Friday I was honoured to be asked to unveil the Blue Plaque to mark the former Brighton office of the Women's Social and Political Union (WSPU) near the Clock Tower.

Campaigners and local historians have been piecing together the important role that women in the city played in the suffrage movement, and working hard to ensure that their achievements are properly recognised, remembered and celebrated.

Unveiling the Blue Plaque is another step in their important work. The fact that it’s in such a prominent spot in the city, one very familiar to residents, and one that visitors are likely to pass by, will hopefully serve as a reminder of the important work that took place at number eight (now number 12!), The Quadrant, over a century ago. A reminder that campaigns are not always quickly won, but how vital it is to find our voice, and to use it. To never forget to speak up, and speak out.

On Friday I was in good company. The unveiling of the plaque was a truly cross-party occasion, and it was good to see so many familiar faces of local brilliant, and passionate, activists and campaigners.

Five years ago I was lucky enough to go on a suffragette walk in the city with the fabulous Karen Antoni. It was an opportunity to learn more about Brighton and Hove’s rich history, and the role that women in the city played in the suffrage movement locally.

Elizabeth Dwiar, the local historian and campaigner, who so passionately championed the Blue Plaque, was also on the walk. As we stood by the Clock Tower we spoke about how brilliant it would be to mark the WSPU office with a Blue Plaque, so I’m delighted to see it realised.

Mary Clarke may be a less familiar name than that of her sister, Emmeline, but she carried the same spirit and determination. As a key organiser at the WSPU office in Brighton for the election campaign in 1909, she encouraged women to unite, and to rebel, and she was an important link with campaigners in London, Manchester, and elsewhere.

Mary was fearless in her approach, but sadly never lived to see women gain the right to vote, for which she so passionately fought. Tragically Mary died in 1910, just two days after being released from prison, where she had endured being force-fed. Mary was the first suffragette to lose her life during the campaign. I’m pleased that plans are now underway to remember Mary locally with a statue.

In the meantime, when I get back to Brighton after a day of debate and votes in Westminster, when I walk down Queen’s Road from the station to my constituency office, I pass the Clock Tower, and I will remember Mary, and those like her who were unafraid, and uncompromising, in their fight for equality and the right to vote.

Those like Elizabeth Robins; Minnie Turner; and Clementina Black whose wilful disobedience has been recorded. Like Eva Bourne and activist Mary Leigh who hid in the organ at Brighton Dome to disrupt a talk due to be given by the then Prime Minister, Herbert Asquith. Like Miss Reid, Mrs Goodier, Miss Gye, Mrs Brandon, Miss Rae, Mrs Bouvier, captured in a photo from 1914 outside the WSPU office. As well as the many nameless women who stood by their side, and who were creative and radical in their efforts to change the history books.