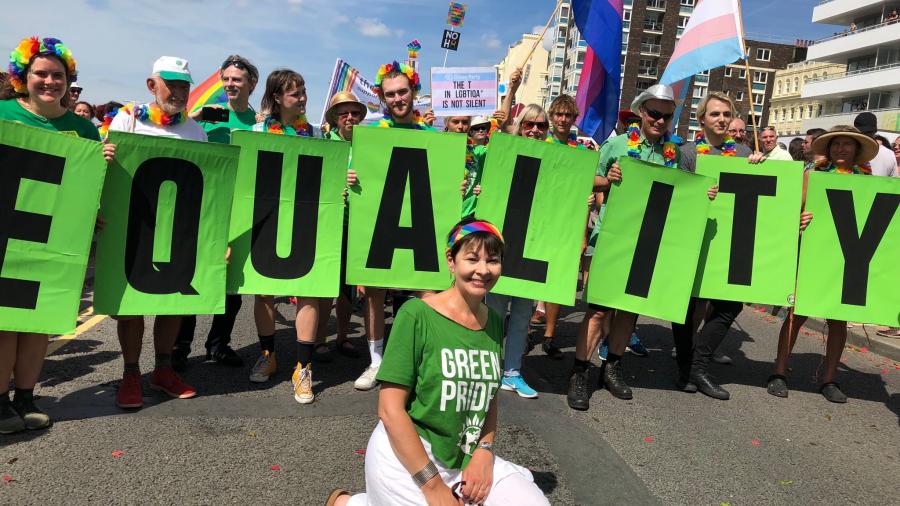 It already felt like it would be an exceptional Pride when it was announced in January that Britney Spears would be headlining. Britney fan or not, there was no denying that this was big news.

When tickets went on sale in February and systems crashed because of demand, it reinforced the fact that this year Pride was going to be huge.

With the promise of good weather, and the draw of brilliant Brighton on a sunny day, people from outside of Brighton were always going to come – in the thousands.

And it was an exceptional Pride.

I joined the parade in the morning, and I went to the event in Preston Park in the afternoon and evening. Both were a reminder of why Pride is still such an important event, one that brings people together, and one that champions and celebrates diversity, equal rights, and inclusion.

And right now, with the progress being made on equality under threat, and with deliberately careless words being written and spoken by Government Ministers and Presidents, it’s important to call out such toxic messaging, and focus on unity and solidarity.

Unfortunately, despite it being an exceptional Pride for so many of the right reasons, at the end of the evening it became an exceptional Pride because of the problems a vast number of people had getting home – something which spiralled into anti-social behaviour, large amounts of litter, noise nuisance, and most worrying of all, safety concerns at Brighton station, and elsewhere in the city.

With people writing to me to say that they felt it was a dangerous situation at the station; with residents in Grange Close feeling genuinely fearful because of the unexpected overflow of people ending up in their street; it’s vital that the problems that took place post-Pride are properly investigated, and that lessons are learnt to prevent similar problems happening again at future large-scale events in the city. I’ve contacted Sussex Police, Brighton and Hove City Council, GTR, and Pride organisers about the work they plan to do to review the aftermath of this years’ Pride.

One mum that contacted me following Pride described how she struggled to get home with a 15 and 16 year old until 11.30am the next day, saying that “it was mine and the kids’ worst nightmare! It was such a dangerous situation to be in, we were crushed, pushed, trampled on”. Yet before that, they had enjoyed a brilliant day, one that helped her daughter’s friend, who has battled with their sexuality, feel accepted for the first time. Once the memory of their nightmare journey has lessened, I hope it’s this feeling that is the overriding memory of their day and they come back next year.

I’ve been told by Pride that they plan to work with all of those responsible for arrangements during the festival to ensure that such problems do not happen again. Like me, they are raising questions about the measures in place after the event, and they are committed to ensuring that every step possible is taken to avoid a repeat of the scenes we saw at the station, and other spots, on Saturday night.

I think that most residents in the city accept that such a large scale event does bring with it some compromises, like road closures for the parade, the need for additional clean-up measures in place afterwards, and busy public transport. What felt different for many this year, was that the exceptional number of people, and the measures in place to manage the crowds effectively afterwards, made them feel as if public safety had been compromised – and this needs to be at the heart of the post-event review that takes place, and will be something I will be pushing for.

With an estimated 150,000 more people visiting the city this year to celebrate Pride than last, the pressure on organisers, the local authority, and the police was immense. With so much tremendous work taking place on the ground on the day, it’s in everyone’s interest to learn from enormity of the logistical problems getting people home at the end of the night, so that recognition for the hard work that takes place isn’t overshadowed by criticism.

With Pride covering the cost of the clean-up in Preston Park, and the official Pride Village Party site, I'd also like to see conversations taking place about the clean-up operation in other parts of the city if the event does overspill to the same extent in the future.

Pride has a long and proud history in Brighton and Hove. It makes a huge contribution to the local economy, bringing in around £18 million this year according to recent reports. The Pride Impact Fund also helps to support local groups and organisations by offering grants for their work supporting vulnerable residents in the city, and those involved with community-led projects and initiatives. More than that, like the mum who wrote to me yesterday highlighted, Pride offers hope. For some it can be a lightbulb moment that things will be OK, and that more people than you ever imagined possible are accepting, and welcoming, and that it’s OK to be you.

I’m proud that we celebrate Pride so brilliantly in this city, and I’m hopeful that the problems afterwards this year will not overshadow the important message it brings.