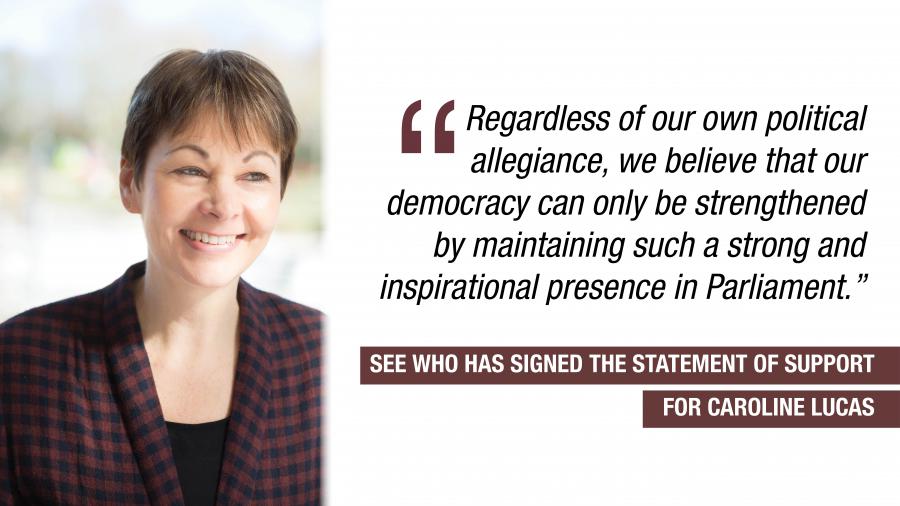 Joanna Lumley, Billy Bragg, Lily Cole and Stephen Frears also lend their support: ‘She is a strong and inspirational presence in Parliament ... it’s crucial that Caroline Lucas, the Green Party’s sole MP at this time, should be re-elected’

A HOST of celebrated household names have today united behind the bid to see Caroline re-elected as Green MP in Brighton Pavilion.

In a remarkable display of support for an individual candidate, a group of 40 leading campaigners, writers, actors, scientists, broadcasters and business people have called for Caroline to be returned to Parliament.

In a joint statement, the group says that - regardless of personal political allegiances - they believe “our democracy can only be strengthened by maintaining such a strong and inspirational presence in Parliament”.

They add that, as mainstream parties struggle to address crucial climate and social justice issues, Caroline’s leadership in Westminster matters ‘all the more’.

It comes in the same week Brighton legend Dick Knight, former chair of Brighton & Hove Albion - speaking in a personal capacity - backed Caroline for re-election. Speaking on Wednesday, Dick said: “Caroline’s earned the right to continue her genuine commitment to improving our society - in the place where she will stand up and can be counted on to make a difference. I wish all MPs were as brave.”

Campaign Manager Adam McGibbon said: “Caroline has stood up for her constituents tirelessly and we need her to continue being our strong, independent Green voice in Westminster, to hold parties to account and press them to be fairer, bolder and more progressive, for a politics that works for everyone.”

STATEMENT OF SUPPORT FOR CAROLINE LUCAS

“Most of us are not members of the Green Party, and many are not much involved in party politics. But we all feel it’s crucial that Caroline Lucas, the Green Party’s sole MP at this time, should be re-elected in her Brighton constituency on May 7th.

Over the last five years, Caroline has eloquently addressed many of today’s most pressing issues – from accelerating climate change to sustainable farming, from human rights to a just and sustainable economy. This leadership matters all the more at a time when the mainstream parties are finding it so hard to address these challenges properly.

Regardless of our own political allegiance, we believe that our democracy can only be strengthened by maintaining such a strong and inspirational presence in Parliament.”

Special Representative for Climate Change at the UK Foreign and Commonwealth Office, 2006-2012

Campaigner for animal welfare and the environment

Activist for the environment and peace; teacher

Co-founder and Executive Vice-Chairman of the Eden Project

*Each of us has signed this Statement in our personal capacity*