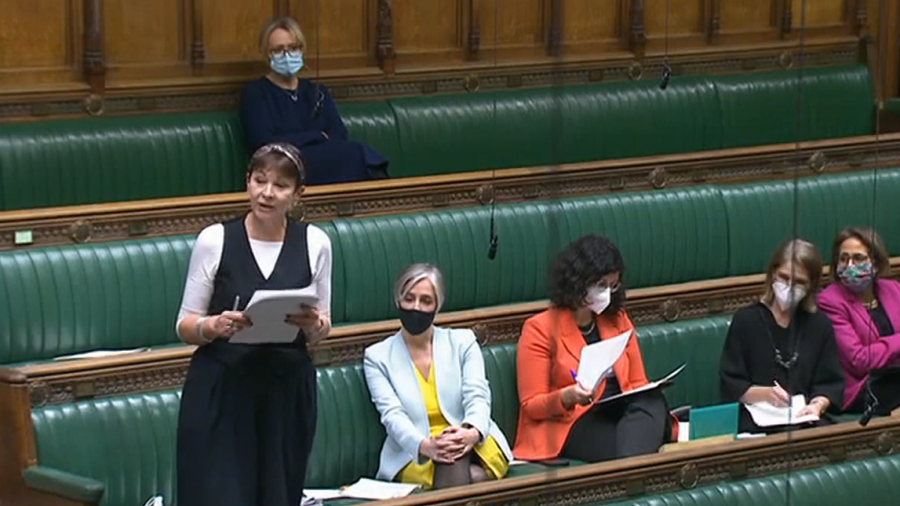 With warnings from scientists and public health experts about the serious threat Omicron poses to public health, and to an NHS which is already “beyond full stretch”, we need much stronger measures to try to control its spread.

On Tuesday, when MPs debated the Government’s new restrictions, based on evidence I’ve heard as Vice Chair of the all party parliamentary group on Coronavirus, I called on Ministers to take a more robust, evidence-led and public health driven approach than they’ve done to date.

In my speech, I also set out some of what I think is missing.

Better sick pay so people can afford to self-isolate would be a good place to start.  Until it fixes this, the Government is disincientivising people from testing properly or self-isolating if they test positive.

We urgently need greater investment in ventiliation measures too, especially in schools.  Since poorly ventilated classrooms have six times more Covid cases than better ventilated ones, Ministers should use the forthcoming school holidays to put this right.

Financial support for businesses, particularly in the hospitality sector, is also critical. A continued low rate of VAT, extending and expanding business rates relief (with councils reimbursed), new grant programmes, a proper self-employed income support scheme, and flexibility over repaying existing loans could mean the difference between survival into next year and more losses to our local economies.

All of us are dreading the prospect of not seeing loved ones at Christmas, again.  But that’s the direction in which we’re heading unless the Government shows some leadership and tells us the unwelcome truths we might not like to hear.  One such truth is that we need to reduce social contacts now. There is a direct relationship between the number of contacts we have and the spread of infection, so guidance to work from home whilst still giving the green light to Christmas parties makes absolutely no sense.

THE COMMONS VOTES ON COVID MEASURES

Unfortunately, there wasn’t an option to vote for that this week.  Instead the Government proposed the reintroduction of compulsory face masks in most public indoor venues and new rules around self-isolation – measures which, while they don’t go far enough, I supported.

In two votes, however, after carefully weighing the evidence I didn’t back the Government, and instead joined Liberal Democrats, 20-odd Labour MPs and around 100 Conservatives in opposing the introduction of blanket mandatory vaccination for NHS workers and Covid passes. I don’t believe these specific proposals will make us safer – and indeed that they could be counterproductive in terms of encouraging vaccine take-up.

Vaccine passports - requiring someone to show proof of vaccination before gaining entrance to a venue - have been widely criticised on civil liberties grounds. An inquiry by Parliament’s Public Administration Committee earlier in the year concluded that the Government hadn't made a robust case for their use.

And of particular concern to me is the growing evidence on the impact of vaccine passports on vaccination rates. That evidence suggests that, while passports can accelerate take-up rates among those already inclined towards vaccination, they also entrench opposition among those who are hesitant.  A major reason for people choosing not to get vaccinated is lack of trust. Trying to force them into it, either with vaccine passports or mandatory vaccination in some settings, compounds that mistrust.

The Government proposal put before MPs this week was for a Covid Pass that would allow proof of a negative lateral flow test to be shown as an alternative to proof of vaccination, and that’s definitely an improvement on their earlier plans.

However, by combining that proposal with vaccine passports, the risks associated with passports remain. Behavioural scientist Professor Stephen Reicher has set out the risks: “Vaccination would cease to be something that is done with and for people.  It would instead be something imposed by an external agency – and hence both political and medical authorities would be repositioned as the “other”. All this would do is generate anger, and lead people to reassert their autonomy by refusing the vaccine.”

Similar concerns informed my decision on mandatory vaccination for NHS staff.  Covid vaccines have already been made compulsory for social care staff – and warnings about the negative impact on a sector already struggling with staff shortages have sadly been justified. There’s a very real risk of a similar exodus of staff from the NHS, and a number of Trusts have already raised their concerns – as have the British Medical Association, the Royal College of Nurses and UNISON.

The Government’s plans mean that not only frontline health staff but also receptionists, porters and cleaners will be under enormous pressure to accept a vaccine or potentially lose their job. Coercion is not a strategy to overcome mistrust in vaccination, and BAME communities will be amongst those where the negative impacts of mandatory vaccination will likely be most keenly felt.

Vaccination uptake across the health and social care sector is already high, with 94% of NHS trust workers having been vaccinated.  Targeted, supportive interventions based on education and encouragement, have been very effective to date – abandoning that approach risks dangerous staff shortages and, since vaccinated people can still transmit the disease, it’s too much of a blunt instrument, ignoring the benefits of daily lateral flow tests, for example.

There is also the message we are sending to NHS staff. In the early months of this pandemic they were clapped and called heroes.  They are now exhausted and face even more months of intense pressure on the frontline.  We owe them our respect and understanding – not the threat of losing their jobs.

The case for a coherent, precautionary and evidence-led approach couldn’t be stronger. I will continue to call on the Government to bring forward a far stronger, more comprehensive plan of action. We will all pay the price if it doesn’t.