search mobile
My Speech to the biggest demonstration in British History 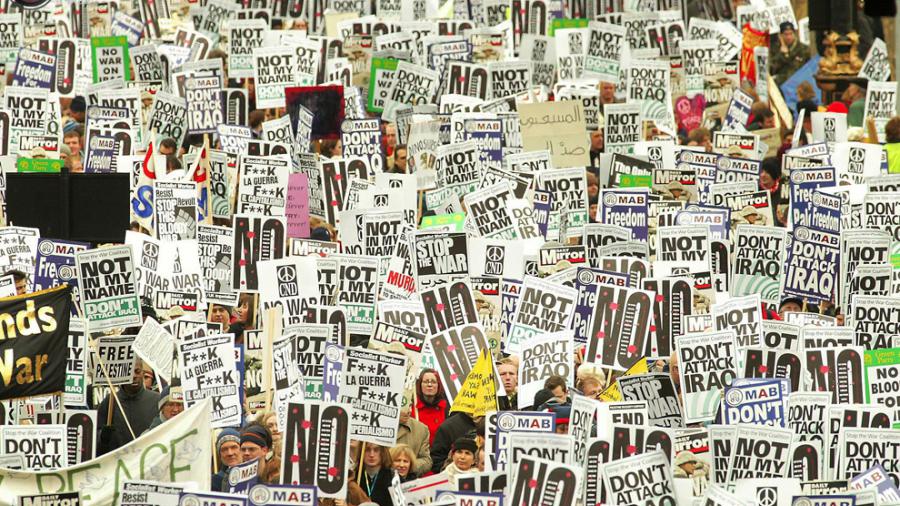 My Speech to the biggest demonstration in British History
Tuesday, July 5, 2016

On February 15th 2003 I took part in the largest demonstration in British History. I was an MEP at the time. Up to one million people marched through the streets of London demanding that the Government step back from the brink and refrain from bombing Iraq.

This morning Sir John Chilcot publishes his report into the Iraq War. I've been granted early access to read his findings and i'll be commenting on his conclusions later today.

In the meantime I thought I would reprint, in full, my speech to the march. At the time I called the war 'Illegal and Immoral' - and I stand by that today.

My Speech to the biggest demonstration in British History

It’s brilliant to see so many people here – it looks fantastic!

People have asked me during the week whether I really think a rally like this can make any difference?

And my answer is – of course it makes a difference!

2.     And we’re here because we know that this war is illegal and immoral:

·         Illegal, because nothing in the UN Charter sanctions this kind of pre-emptive attack

·         Immoral, because it will have devastating impact on the ordinary people of Iraq

I’ve just come back from Iraq and I saw at first hand how the people of Iraq are already in the midst of a humanitarian crisis.

Economic sanctions, prosecuted by the US and British governments in particular,  are crippling the economy and crushing the people.

I spoke to doctors who are crying out for the medicines they need to treat the children who are dying in their hospitals because basic medicines are banned.

Over half the population depend on food rations.   Iraq has suffered a faster increase in rates of child mortality than any other country in the world.  1 in 10 children die before their fifth birthday.  Over 1 million children suffer from chronic malnutrition.

War will make this almost unimaginably worse.  If the food distribution system is hit, millions will go hungry.  If the water treatment system is hit, sewage will contaminate fresh water, and epidemics of typhoid and cholera will follow.

In Basra in the South, people are still dying as a result of the last war, from the deadly radioactive depleted uranium weapons that were used – they live and die with a legacy of cancers and leukemias and terrible birth malformities.

And so when this government tells us they are waging war for the sake of the people of Iraq, we say Not So.

This war is NOT for the people of Iraq.

This war is for imperialism and for Oil.

And a second UN Resolution will make absolutely no difference to that.

A second UN resolution, achieved through bullying and bribery at the Security Council,  will not make this war more just.

It will not make this war more morally acceptable.

It will not make this war any less dangerous and damaging.

It will not make it any more legitimate and right.

This war is illegal, immoral, dangerous, and wrong.

People talk glibly about war on Saddam Hussein.  But it won’t be Saddam Hussein who is on the front line when the bombs start dropping.

It will be the 25 million people of Iraq.  And each and every one of their lives is just as precious and just as valuable as a British life or an American life.

And there are alternatives.  When I was in Baghdad, I met with representatives of the weapons inspectors.  And they told me that with more time and resources, they could do their job effectively and well.   It would be criminally irresponsible to pull them out now and go down the road to war.

If this war is really about getting rid of weapons of mass destruction, an international legal framework already exists for global disarmament.

·         It’s called the Nuclear Non-Proliferation Treaty.   But the US and Britain have been in “material breach” of that particular piece of international law for 30 years.

·         We have a protocol on the Convention of Biological and Chemical Weapons – it was due to be signed a few years ago, and it would have set up a rigorous verification system.  Do you know who vetoed it?  The United States! – and why?  Because it would involve “intrusive inspections”!

The hypocrisy of our leaders is sickening and unacceptable.

·         We are here to say that we know that behind so-called precision bombing and smart bombs, lives are shattered and destroyed.

And together we can achieve it.  Thank you for being here – it really does make a difference.