While this week’s Autumn Statement disappointed - with a lower than previously forecast increase in the so-called ‘national living wage’, there was better news on NMW enforcement, with chancellor Phillip Hammond announcing an additional £4.3m in 2017/18 to “help small businesses to understand the rules” and “crack down on employers who are breaking the law by not paying the minimum wage”.

In April, during a House of Commons debate on the national living wage and its enforcement, the then business minister Nick Boles gleefully revealed that, in 2015/16, HMRC recovered “more than £10 million of arrears for more than 58,000 workers”. A few days later, a parliamentary question I asked extracted a more precise arrears figure of £10.3m. And, as the following chart shows, that does represent a very substantial increase on previous years. 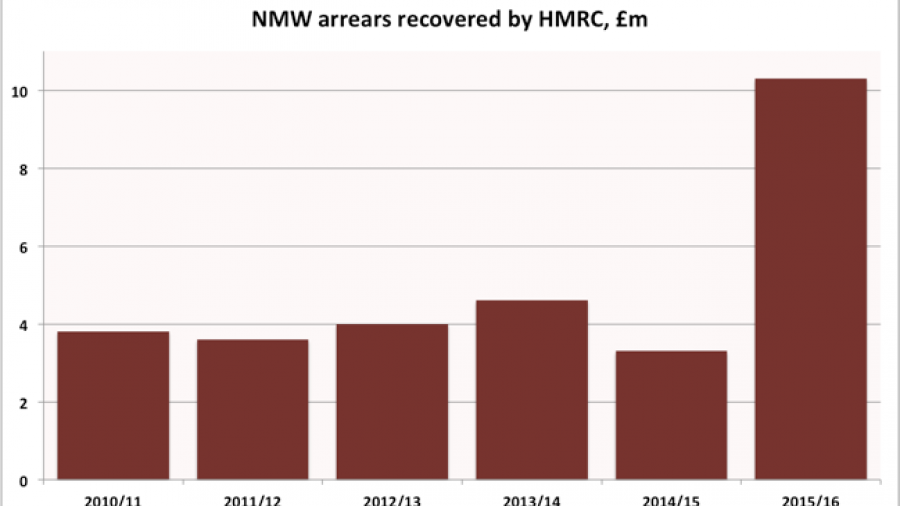 That at least some of this three-fold increase in arrears recovered is down to the increases in HMRC’s resources is not in doubt. For example, in 2015/16, the number of employers against whom enforcement action was taken increased by about a third, from an average of 717 in the previous three years, to 958.

However, as revealed by another Parliamentary Question I asked, £0.74m of the overall increase of some £6.31m, relative to the previous average, is accounted for by the 56 employers who took advantage of a six-month ‘amnesty’ for self-reporting NMW offenders, quietly announced in July 2015. Under the terms of that one-off ‘amnesty’, those 56 employers (who between them underpaid 4,875 workers) did not have to pay any financial penalties (normally levied at 100% of the total arrears owed), and were exempted from being ‘named & shamed’ by BIS/BEIS.

And, in May 2016, a National Audit Office report on enforcement of the minimum wage revealed that, in 2015, HMRC introduced a mechanism under which, “following an intervention from HMRC”, employers are allowed to self-correct underpayments of the National Minimum Wage. Until recently, there had otherwise been no government announcement or even acknowledgement of this new mechanism, but in October, in its Evidence for the Low Pay Commission’s Autumn 2016 Report, the Department for Business, Energy & Industrial Strategy (BEIS) stated:

“Where HMRC have investigated an NMW complaint, found arrears and issued a Notice of Underpayment detailing those arrears and penalty due in respect of the complainant, they have the flexibility to instruct the employer to self-correct for the rest of their payroll – freeing up HMRC staff to work on more investigations. This approach is only used in cases where it is deemed appropriate and HMRC follow up with a sample of workers to ensure the arrears due have been paid.”

In other words, 60% of the overall increase in arrears recovered in 2015/16, relative to the previous average, is accounted for by this new, ‘self-correction’ mechanism. Yet those 113 employers did not have to pay any financial penalties in respect of that £3.84m (normally levied at 100% of the arrears owed), and will not be ‘named & shamed’ for those ‘self-corrected’ arrears, even if they are ‘named & shamed’ in respect of arrears owed to those workers covered by the initial HMRC investigation. As a result, in 2015/16, HMRC imposed total financial penalties of just £1.78m, when ‘recovering’ total arrears of £10.28m – an actual penalty rate of just 17.3%. 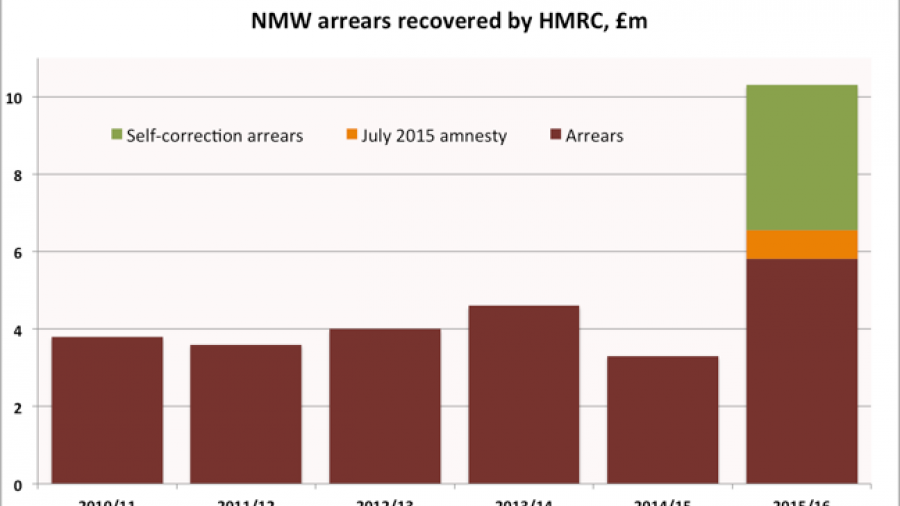 While it is clearly welcome that those 17,637 workers received an average of £217 of arrears that, but for the new self-correction mechanism, they may well never have received, it is deeply unfortunate, to say the least, that the 113 employers did not pay any financial penalties in respect of that £3.84m of arrears. For, not only was the taxpayer deprived of up to £3.84m of penalty income, but those 113 (presumably large) employers effectively paid penalties only on part of the sum they owed to workers as a result of their flouting of the minimum wage – a facility not available to the great majority of (small) employers against whom HMRC takes enforcement action.

Furthermore, those 113 employers will never be ‘named & shamed’ for that £3.84m of arrears, even if they are ‘named & shamed’ in respect of the arrears owed to the (almost certainly) smaller number of workers covered by the original HMRC investigation. This makes a mockery of the ‘naming & shaming’ scheme, as the public can never be sure, when noting that any particular employer has been ‘named & shamed’, that the figures given for ‘arrears owed’ and ‘workers covered’ reflect the actual extent of that employer’s flouting of the law. For example, the original HMRC investigation might have covered just two workers, but the employer might then have self-corrected for another 500 workers – and the public will never know.

“This government is determined to build an economy that works for everyone, not just the privileged few … It is not acceptable that some employers fail to pay at least the minimum wage their workers are entitled to. So we’ll continue to crack down on those who ignore the law, including by naming and shaming them.”

But this month, in response to a further parliamentary question i tabled, BEIS confirmed that 22 of those 197 employers self-corrected additional arrears totalling £411,000, owed to 1,574 workers. Not only were no financial penalties imposed in respect of that £411,000 of arrears, but the public have not been told the identity of those 22 employers, or how much of that £411,000 they each owed, in addition to the sum for which they were ‘named & shamed’.

Ministers are to be commended for securing yet another increase in funding for NMW enforcement in the Autumn Statement. But if the public are to retain confidence in the system, ministers must now act to increase both transparency and accountability, and extend both financial penalties and ‘naming & shaming’ to arrears recovered under the self-correction mechanism.