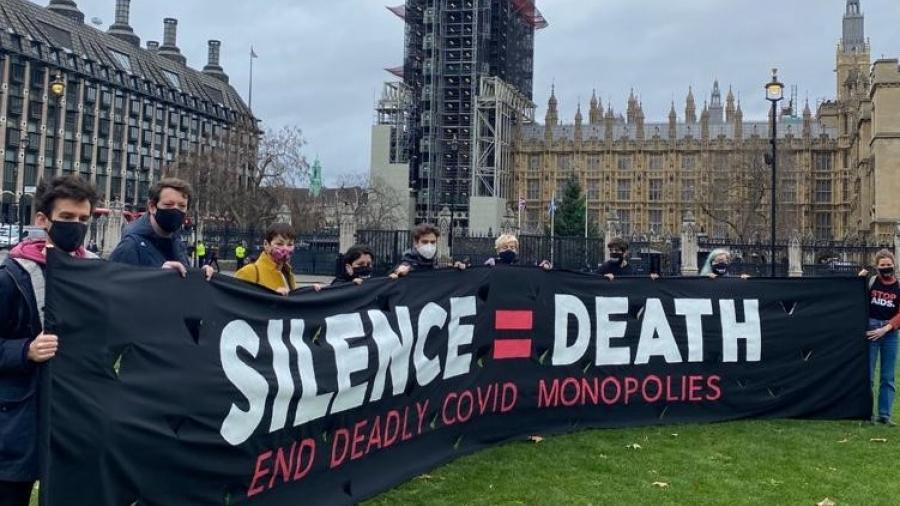 The rapid spread of the Omicron variant of Covid is causing real concern among public health experts.  No-one is safe until everyone is safe and the continent of Africa, where this variant was first identified, has been shamefully left to pick up the crumbs in the global vaccine rollout.  While the UK has procured enough doses to vaccinate the population more than six times over, the whole of Africa doesn’t even have enough to vaccinate the vulnerable and front-line health workers.

The vast majority of countries are asking for a waiver on intellectual property for Covid vaccines, so they can be manufactured in the Global South and made more widely available but - shamefully - our own Government is resisting this.  When I raised this with the Health Secretary in the Commons, he said it wouldn’t be “helpful” – an unbelievably arrogant response.  It’s time Covid vaccines were made available to everyone, and public health was put before the profits of big pharma. You can see our exchange here.  I also wrote about the inequity of the Covid vaccine rollout in my column in Metro.

The drownings in the Channel

My heart goes out to the families of the 27 people who drowned trying to reach our shores in a small boat.  We’ve seen a lot of hypocritical hand-wringing from ministers and talk about “breaking the business model” of the people smugglers, but nothing about really addressing the issue by providing safe, legal routes to asylum so people don’t have to risk their lives to claim asylum here. Virtually all legal routes, including the Dubs scheme for unaccompanied children, have been closed down forcing people on to the small boats. The Government’s approach to refugees is cruel and inhumane, and about to get even worse with the Nationality and Borders Bill criminalising all those who reach our shores this way.

Why we need a Wellbeing Economy to deliver climate goals

In my last newsletter, I wrote about the COP26 UN climate summit and what it had, and hadn’t, achieved.  One of the glaring omissions at the summit was any discussion about the real driver behind the climate and ecological crisis - the way we run our economy.  The pursuit of endless GDP growth on a planet of finite resources is driving us towards climate breakdown and ecological disaster which is why we need to rethink our economic model and move to an approach focused on health and wellbeing.

I had supported a parliamentary petition for a wellbeing economy started by a young constituent – it secured nearly 70,000 votes but that wasn’t enough to guarantee a debate via the Petitions Committee.  But I was lucky enough to secure a debate in the ballot. You can read my speech, and the other contributions, here.

Just prior to the wellbeing economy debate, I spoke in support of the Local Electricity Bill which would enable the local supply of renewable electricity, and allow community generators to become local suppliers, breaking the monopoly of the national grid and offering greater incentives to people to install green energy solutions.

Questioning the minister about COP26

Ten days after the end of the climate summit, the COP president Alok Sharma was in the Commons to answer questions about the Glasgow Climate Pact. I challenged him on the Government’s failure to support a separate finance stream for loss and damage, to compensate climate-vulnerable countries for the devastating losses they are suffering now as a result of extreme weather events.  Scotland has made a finance commitment and the UK government should do so too.  You can read our exchange here.

I also had the chance to question the Prime Minister about his commitment to climate action, picking him up on his comment that COP26 showed we could end our reliance on fossil fuels.  I asked him if we would commit to leaving fossil fuels in the ground, and cancel the licence for the Cambo oil field off Shetland and the 39 other oil and gas exploration licences agreed by the Government. The answer was his usual bluster and evasion of the question.  Since then, we’ve had the good news that Shell is pulling out of the Cambo oil field, which might just be its death knell.

The Government’s plan for the social care system is deeply unfair – it would mean those living in houses worth around £100,000 face losing nearly all their assets to pay for social care, while those living in houses worth £500,000 would lose just 17%.  The injustice is so stark that it was deeply depressing to see the vast majority of Tory MPs troop through the lobby to vote for it.

It was also depressing to see the disastrous NHS Bill voted through its final stages in the Commons, giving private health companies, including US health giants, a foothold in our NHS.  Ministers repeat the refrain that the NHS is not for sale, but that’s not what’s happening in reality.

Many of you will know that I’ve campaigned for some time for a new GCSE in natural history. I spoke in a parliamentary debate about why this would be such an important addition to the curriculum, not least because it aims to give pupils an intimate knowledge of nature and first-hand of experience of working with nature in a very different way from desk-based learning.  I’m planning to follow this up with a meeting with the Minister next week.

I was delighted to officially open the Starlings Roost, the first dedicated viewing point on the south coast for the fabulous starling murmurations.  Right on cue, these incredible birds appeared in their thousands with their famous winter murmuration.

Watching them twist and turn in huge numbers can give the impression that starlings are in good health, but in fact their numbers have declined by about two thirds in the last 50 years.  I hope the Starlings Roost will help people better understand these wonderful birds and do what they can to protect them. A live webcam means you can watch them roost under the Pier via the Pier’s website.  Many congratulations to animal rights campaigner and celebrity vet Marc Abraham for conceiving the idea and Anne Ackford, CEO of the Palace Pier, for facilitating it!