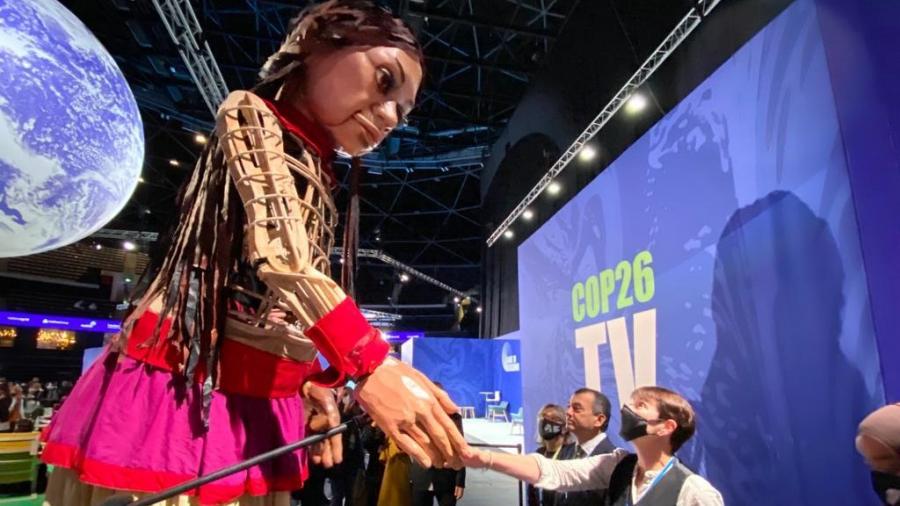 This was the most important international summit held in the UK and our best chance of averting climate catastrophe.  To say the final agreement fell short would be an under-statement – it showed nothing like the ambition or urgency required in the face of an escalating crisis.  We urgently need to bring an end to the fossil fuel era, limit global heating and build a better future for all of us. But we won’t do it with the kind of incremental steps taken in Glasgow and each delay makes the task ahead much more difficult.

The summit also failed to deliver climate justice to countries on the frontline of climate change who are suffering its worst impacts, yet did the least to cause it.  They were let down yet again by the developed nations’ delay in delivering a promised $100bn climate finance package and by the failure to provide compensation for the loss and damage that those countries are suffering now.

I started my time in Glasgow by joining 100,000 people in Scotland’s biggest-ever protest on the march for climate justice.

spoke at a number of meetings with parliamentarians from around the world, and also took part in a number of side events including on the global Green New Deal and a Wellbeing Economy.  I also joined more than 150 legislators from 32 countries calling for a fossil fuel non-proliferation treaty.  I talked to dozens of climate activists and civil society organisations from all over the world about their vital work to bring about change.  They were the ones showing true leadership at COP26.

While in Glasgow, I wrote comment pieces for the iPaper, the Evening Standard and the Independent.  I also appeared a couple of times on the Today programme on Radio 4.  And in my column in Metro, I summed up what I thought the summit had, and hadn’t, achieved.

In his statement to Parliament, the Prime Minister tried to spin COP26 as a success – it wasn’t. His refusal to join the Beyond Oil & Gas Alliance launched at the summit showed that, while he gives speeches about “one minute to midnight”, he’s not prepared to walk the talk on climate action.  I challenged him on his Government’s own record during the statement – you can read our exchange here.

Little Amal, a giant puppet of a Syrian refugee child, has been making her way across Europe to draw attention to the plight of young refugees.  She’s a compelling symbol and by coming to COP26, she highlighted the ways that women and girls are disproportionately impacted by the climate crisis.  It was very moving to *meet* her.

The day before I took the train to Scotland, I was a panellist on BBC Question Time which was recorded in Eastleigh.  Two of the questions were about our response to the climate crisis, another was on Tory sleaze.

The past three weeks have been very damaging for Parliament and for our democracy, a situation brought about entirely by Tory sleaze and the Government’s response to it. The attempt to change the rules on parliamentary standards to protect Owen Paterson was disgraceful – akin to rigging the justice system after a conviction to get your mate off scot-free.

During the debate on Owen Paterson, I challenged the Leader of the House on the new “appeals process” the Government proposed, a clear undermining of the rules.  He defended it, only for the Government to U-turn the following morning. But that didn’t wipe away the stench of sleaze or the one-rule-for-us-another-for-everyone-else.

This scandal has been a long time in the making and underlines the need for a better, stronger democracy – the theme of a piece I wrote with Labour MP Debbie Abrahams in the iPaper.

Since the Paterson debacle, the Prime Minister has been rapidly backtracking on MPs’ second jobs. But he hasn’t addressed some of the other sleaze issues like the offering of peerages in exchange for donations to the Tory party, the PPE contracts for the Tories’ mates and the extravagant gifts given to him personally.  What is essential now is that whatever the Parliamentary Standards Committee recommends in its upcoming report is put to an early vote by the Government and accepted in full.

Three months after the Government announced the Afghan Citizens Resettlement Scheme, it is still not up and running.  I continue to receive desperate pleas for help from constituents with family in danger in Afghanistan or who are stuck there themselves.  I have now tabled an Early Day Motion in Parliament calling on the Government to urgently open the scheme and raise the cap on numbers who’ll be allowed to enter the UK. It’s had support from MPs of all parties.

Ambulance service in Brighton and Hove

It was very worrying to see South East Coast Ambulance Service (SECAmb) declare a critical incident on Wednesday because of an IT failure.  That morning I had written to the Health Minister about the intolerable pressures the service is facing, with staff shortages and a huge increase in demand. The crisis in the ambulance service is just the tip of the iceberg – the whole of our NHS is under huge strain because of growing pressures and years of Tory under-funding.

Both local and national debt advice services have raised concerns with me about the Money and Pension Service's (MaPS) proposals to recommission debt advice in England and Wales, amid concerns that the new model being considered will result in cuts to face-to face debt advice. I've raised my concerns with Government Ministers and will be doing what I can to support the debt advice sector on this issue. If you want to show your support, you can sign the Unite Debt Advice Network petition here.

I joined Green councillor David Gibson in visiting the amazing Community food shop project run by volunteers at the Phoenix Community Centre, and spoke with local residents for whom it’s an absolute lifeline, particularly at a time of government cuts, and rising inflation.  As well as providing locally sourced food - much of it donated - a collaboration with the Phoenix Arts Space means that people can also pick up art ’sets’ to take home and enjoy.

I was happy to accept an invitation from Andrew Comben, CEO of Brighton Dome and Festival, to meet with representatives of the arts and creative sector in the city to discuss the ABCD Future Recovery Plan, and explore the issues the sector faces as Covid restrictions lift.  I’ll be following up a number of proposals in parliament, including a call for the Kickstart programme to be extended, and the promised £90m Arts Premium delivered.

As your local MP, I continue to receive many messages from constituents seeking help or drawing my attention to problems in the area.  This past week I’ve been following up on concerns about access to Covid booster vaccinations via the national booking system, power cuts in the North Laine, the difficulty of getting an NHS dental appointment, the closure of Virgin Active in Falmer and ongoing issues caused by the DVLA processing backlog.

A reminder that all my appearances in the House of Commons and the questions I put to ministers, both written and oral, are recorded by Hansard. You can find them here.