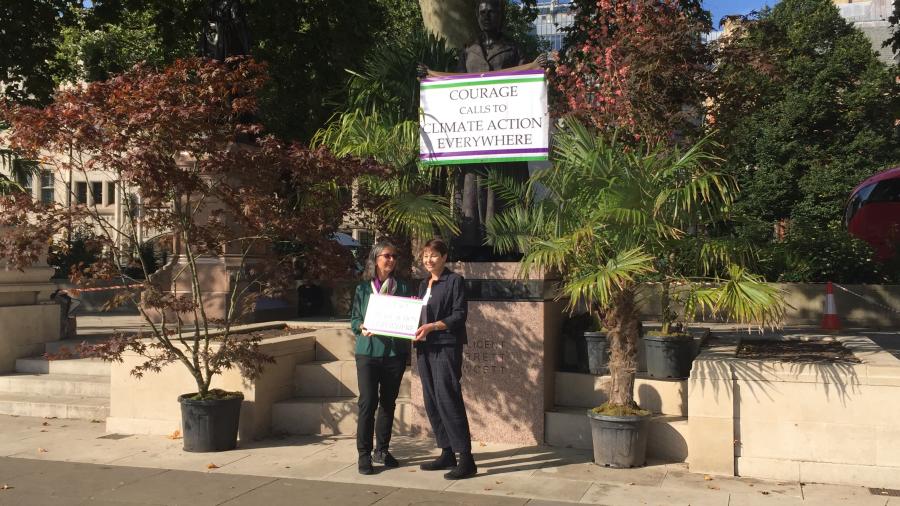 I know many of you will be very worried at the prospect of sharp rises in energy bills because of the gas crisis.  The Government’s pledge to protect consumers from higher prices would be more credible if the Tories hadn’t spent the last 10 years doing nothing to address energy demand by, for example, supporting better home insulation, and it was astonishing that the Energy Minister made no mention of energy efficiency in his statement to Parliament. I raised this with the Minister in the Commons, asking why so little had been done to make people’s homes more energy efficient.  Our exchange is here.

I had another chance to question Kwasi Kwarteng the following day over why the Government is refusing to rule out development of the Cambo oil field, which flies in the face of scientific evidence and warnings from the International Energy Agency that there must be no new oil and gas if we’re to limit global temperature rise to 1.5C.  The Government’s refusal to “walk the talk” on fossil fuels sends a terrible message to other countries on the eve of the COP26 climate summit.

On the subject of COP26, I’m delighted to have helped secure a backbench debate in Parliament on limiting global heating to 1.5C and pushing for the transformative change we need.  It takes place on Thursday.

If COP26 is to be a success, it must focus on climate justice – justice for the global south, for communities on the frontline of climate impacts, indigenous communities at daily risk trying to protect their environment, and for women and girls who face a disproportionate impact from climate breakdown.  I joined Helen Pankhurst in front of the statue of suffragist Millicent Fawcett in Parliament Square, to highlight the need for gender justice in climate negotiations.

The best response to the climate crisis would be a Green New Deal. I was excited to join law makers from around the world for the first (virtual) meeting of the Global Alliance for a Green New Deal, discussing strategies to transform our societies and economies to address the climate, nature and inequality crises.

I also took the lead in writing a letter, signed by 85 MPs and peers from all main political parties, to the Governor of the Bank of England urging him to align UK finance with the Government’s own climate goals.  The Bank of England is tasked with overseeing Britain’s financial system and needs to use its new green mandate to help steer billions of pounds of finance away from fossil fuel investments and towards green, job-creating alternatives.  You can read my comment piece about the issue here.

I wasn’t surprised at the findings of the parliamentary select committees’ utterly damning report into the Government’s handling of Covid.  As Vice Chair of the All Party Parliamentary Group on Coronavirus, I've been trying to hold ministers to account for their failings for the past 18 months.  What is deeply worrying is not only their attempt to shift the blame on to scientists, but their evasiveness over the utter lack of preparedness for a pandemic.  I’ve been asking ministers about Exercise Alice, a preparedness exercise held in 2016, and why the report on it has not been published. I’m being fobbed off with answers saying publication would “prejudice the effective conduct of public affairs”.  Rubbish – it would more likely expose the shambles at the heart of government.

I’ve written before about the Elections Bill, which deliberately suppresses the vote in a dangerous assault on our democracy. The original bill was bad enough, but it has now been amended so that the only elections in England which aren’t run on the deeply unfair first-past-the-post system (for mayors and police commissioners) are being brought into line.  I spoke out against this change in Parliament – you can read my speech here.

The Government’s disastrous proposals to sweep aside planning laws have been opposed by communities across the country.  It’s right that Ministers have been forced to reconsider them because of the threat they pose to nature and wildlife. I have tabled an Early Day Motion raising the threat posed to a planned Sussex Nature Recovery Area from a proposed development allocation. If we are to tackle the climate crisis and protect 30% land for nature by 2030, as the Government has pledged, planning policy has to be aligned with climate and nature goals.

The Government’s response to the Afghanistan crisis has been one of back-pedalling, chaos and failure to grasp its scale and severity.  Afghan nationals who’d been awarded Chevening scholarships to study in the UK were finally brought to safety, but many were not able to bring close family members with them and they are now at extreme risk, as the Guardian reported.  When I try to raise this with the Government, I’m met with deafening silence.  The Home Office needs to move much faster and widen the definition of “close family” so that these scholars’ family members can reach safety.  I also spoke about this on Radio 4’s Today programme.

I was delighted to take part in an assembly organised by Brighton and Hove Citizens, focusing on the issue of mental health. The pandemic has exposed the impact of years of under-funding under the coalition government and, since then, by the Tories - funding for children’s services has fallen by a third since 2010, while referrals have gone up. I know from my constituency correspondence and surgeries how distressing this is for families.  I was pleased to agree to work with others in the city to lobby for more national funding for mental health services, as well as to help build a national campaign to ensure that every child in full time education has access to an appropriately qualified mental health counsellor.

I was very honoured to be invited to cut the ribbon at the opening of the GB MET’s redeveloped Central Brighton campus.  GB MET and other colleges like them in Brighton do brilliant work, offering a range of opportunities to help students fulfil their ambitions.

Some of the courses offered by GB MET and other sixth form colleges are BTECs, a valuable qualification which the Government wants to scrap so students have to choose between A levels and T levels.  I joined 117 other MPs and peers writing to the new Education Secretary to urge him to think again – scrapping BTECs would reduce choice and do nothing to close the skills gap or improve social mobility. You can read the letter here.

Bin strike in Brighton and Hove

It’s been very distressing to see the impact the bin strike has had on our city.  MPs don't have any formal role in decisions that fall within the control of Brighton and Hove City Council but, along with the city’s other MPs, I’m in regular touch with the Council’s Chief Executive and have echoed the calls being made by Green councillors for him to redouble efforts to find solutions to the issue that led to the strike action being called.

I know just how vital bin collections are, and how serious the impacts of service disruptions are on residents, and I’m continuing to speak with representatives at the local authority to do what I can to encourage ongoing dialogue to attempt to break the current deadlock. I'm pleased that it now appears that the Council has a possible way forward after Greens and Labour worked together on solutions at a recent Policy and Resources committee.   I’ve written a blog about the strike and its impact on my website.

I was deeply shocked to hear of the fatal stabbing of David Amess MP during a constituency surgery, the second violent death of an MP in little more than five years.  My heart goes out to his family and friends.

It's rightly raised questions about MPs' security, particularly during constituency events.  I will follow the advice I'm given by the police but remain committed to holding face-to-face surgeries whenever possible.  Meeting constituents and discussing their problems is a vital part of an MP's role and one that none of us would want to give up.