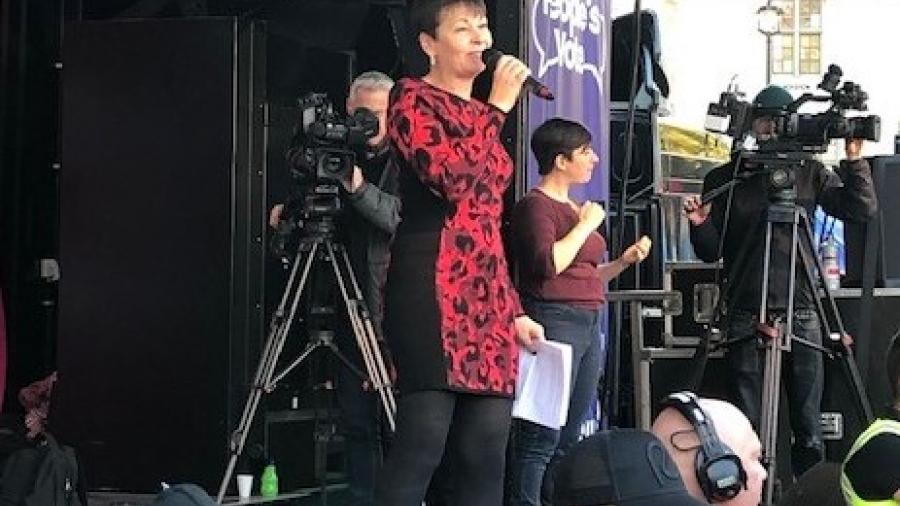 It’s been an eventful couple of weeks over Brexit, beginning with a rare Saturday sitting of Parliament, another huge turnout for the People’s Vote march, and a series of very narrow votes over Boris Johnson’s extremely hard Brexit deal which I believe will be disastrous for Brighton, and for the country as a whole.  It’s culminated in MPs agreeing to an early general election on December 12th, the first winter election in this country for nearly 100 years.

I was one of just 20 MPs to oppose this because I don’t believe a general election will resolve Brexit.  To get a specific answer about Brexit, the government needs to ask a specific question - and the only way to do that is via a confirmatory referendum or People’s Vote.

I spoke at the People’s Vote rally in Parliament Square on the day of the first vote on the prime minister’s deal.  It was hugely encouraging to see so many people there, undaunted by the intransigence of this government and its refusal to listen.  The sounds of the rally could be heard inside the House of Commons – forging a real connection between politicians in the Chamber and many of the people we represent.  Here’s part of my speech to the crowd.

I’ve spoken at a number of key debates on the environment, both in the House of Commons and in Westminster Hall.

The Government claimed its Environment Bill was “the “huge star of its legislative programme” – now abandoned, of course, because of the general election.  We do need a strong bill to protect our environment and stop the catastrophic loss of our biodiversity, but this wasn’t it as I wrote in a piece for New Statesman.  In my speech in Parliament, I pointed out that we’d had countless promises that leaving the EU wouldn’t lead to backsliding of environmental protections but there was no commitment in the bill to non-regression of environmental standards.  In many places, the Bill was a step backwards, not forwards, compared with the protections we have as members of the EU.  You can read my speech here

I also spoke in a debate in Westminster Hall about restoring nature and climate change, where I was able to mention the work done by the wonderful Sussex Wildlife Trust.   I also talked about the need to end the burning of blanket bog, which releases huge amounts of emissions that could otherwise be captured by peat.  And the importance of natural climate solutions.

I’d also tabled an Early Day Motion on the need to plant more trees and massively increase forest cover in the UK.

Brexit and the calling of the general election has taken up most of the airtime and column inches in newspapers over the past few days.  I wrote a piece for the Metro about why I believe Brexit will not be resolved by a general election.  I’ve also done some live interviews for Sky News on the same issue.  You can see one of them here.   Now that an election has been called, it is vital that the climate emergency is at the top of the political agenda – a point I made in an article for the Independent.

I had a meeting with Superintendent Nick May of Sussex Police about security issues in Brighton, particularly the worrying rise in knife crime.  Sussex Police are taking part in a pilot scheme called Reboot working with health professionals, charities and youth offending teams to try to divert young people away from crime, particularly knife crime, and it was useful to hear how this scheme was progressing.

I met Ian McCauley, chief executive of Southern Water, to find out what the company is doing to address its poor pollution record particularly the release of raw sewage into the sea.  You may remember earlier this year the regulator Ofwat imposed a record £126 million penalty in fines and payments to customers for serious failures in the company’s sewage treatment works and a shocking cover-up of what was happening.  A dedicated water pollution reduction taskforce has been set up, MOUs signed with environmental organisations, and new systems established with UK Power.  We discussed the particular challenges posed by Brexit (in particular in terms of access to chemicals for water treatment), the importance of reducing water consumption to more sustainable levels, and measures to reduce the risk of flooding in areas like Patcham.

I’ve received several complaints about the private parking company, One Parking Solutions, as have other MPs in the city.  I’m working with them to support residents who are challenging the company over concerns about unfair practices and questionable decision-making over parking penalties.

The Grenfell Tower report this week has re-focused attention on the safety of high-rise housing blocks.  There are very real concerns among people living in these flats which the Government went some way to addressing by announcing a new buildings safety regulator.  But I don’t believe the proposed measures go far enough to tackle some of the safety risks in existing developments, like Pankhurst Avenue.  I’ve written to the housing minister asking what support the Government is giving to housing providers to carry out the work needed to address fire safety issues on both high- and lower-rise buildings.  I also urged the Government to fund the retrofitting of sprinklers in social housing developments so that residents could feel safe in their own home.  It’s not enough to introduce guidance for new developments and just advice notes for existing homes without ensuring there is the funding to put safety measures in place.  I'm also continuing to follow up individual casework with those made homeless or displaced by the Pankhurst Avenue fire.

I’ve asked a number of questions of ministers, many of them in response to issues which constituents have raised with me. The issues include arms sales to Turkey, in light of its aggressive attack on Syria; the fate of UK nationals being held in prison camps in northern Syria, particularly the children of ISIS fighters; the quality of surface water; the state of our SSSIs and whether the Environment Agency has the sufficient resources to do its job; the disproportionate police response to the Extinction Rebellion protests in London; the welfare of race horses;  and the payment of Personal Independence Payments to people over 65 on disability living allowance.

I strongly supported the campaign against period poverty in schools, so I was pleased the Department for Education listened and is now providing free period products in schools and for 16-19 year olds in college.  The contract was awarded in mid-October and has gone to a company which says it will provide a range of products, including reusable pads. The scheme is being rolled out to schools and colleges in January next year.