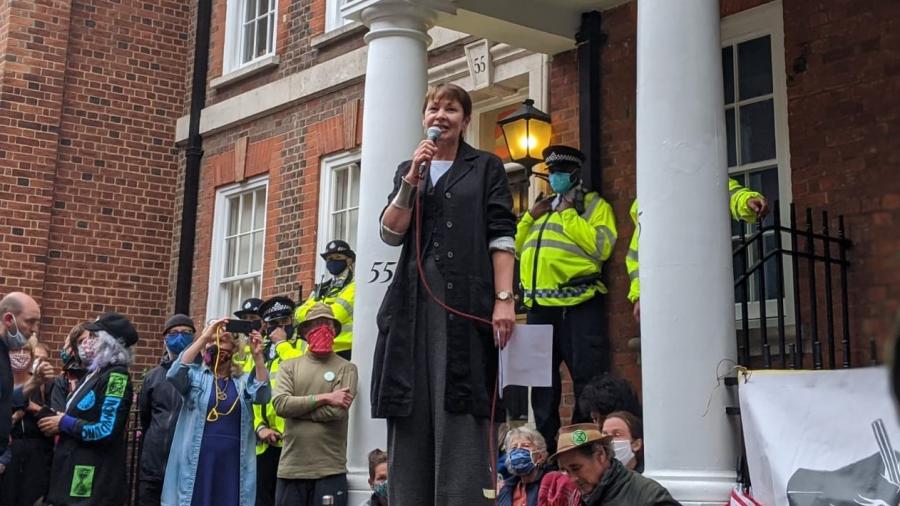 It’s been a busy start to the new session of Parliament which returned this week. I took the first opportunity to introduce a critical Bill which provides a route map for responding to the climate and nature crises.

Seven political parties have given their support to this Bill which strengthens existing laws on climate action, and patches the many holes in the Climate Change Act. Since that was passed in 2008, the climate crisis has accelerated, and so has biodiversity and nature loss.  The science is also much clearer about the scale and speed of the required response.

The Bill, which I introduced on Wednesday, focuses on the goal of the Paris Agreement to strive to limit the average global temperature rise to 1.5oC; it includes emissions from aviation, shipping and our supply chains overseas; it brings nature, wildlife and the protection of soils which are vital for farming and as a natural store for carbon into climate law; and it reaches out beyond Westminster to involve citizens in devising our response to the climate crisis, in the form of a Citizens’ Assembly which would work with politicians.

I also tabled an Early Day Motion calling on the Government to support the Bill and show the climate leadership it so often boasts of.

There’s more about the Bill and why it’s needed in comment pieces I wrote in the Daily Mirror and the Metro.

Supporters of Extinction Rebellion have brought their protests to Parliament in support of the Bill.  It was a privilege to talk to some of them in Parliament Square on Tuesday, and listen to a powerful letter which young people had written to the prime minister urging him to take more ambitious and faster action on the climate. Their campaign slogan We Want To Live summed up their feelings perfectly.

Later in the week there were dozens of arrests of peaceful protesters from Extinction Rebellion, which were raised during an interview I did with Sky News. There is a strong tradition of peaceful protest in our country and I believe non-violent direction action can play a role in reminding people of the critical importance of the climate emergency.

I was also honoured to be part of an event organised by Writers Rebel outside the offices of the Global Warming Policy Foundation and other right-wing organisations in Westminster which lobby against effective climate action.  There was an amazing line-up of artists and writers including Sir Mark Rylance, Zadie Smith and George Monbiot with video messages of support from Simon Schama and Margaret Atwood. You can see part of my speech on my Twitter feed.

I’ve written many times about the multiple shortcomings and failings in the Government’s response to Covid, and the impact it’s having on the country and our city.  My latest concern is the testing fiasco. At a time when cases in Brighton and Hove are rising, and students are about to return to our universities, it is almost impossible to get a test in the city. Some people are being referred to testing centres in as far away as the Isle of Wight – a 5 hour round trip - and that is if they have access to a car. We have been told from the start of this crisis that testing is key to controlling the spread of Covid, but six months after it began, we still don’t have an effective testing operation.

As a member of the All Party Parliamentary Group on Coronavirus, I’ve been taking part in hearings over the summer about the impact the virus is having, and the weaknesses of the Government’s response.  We need to learn lessons now so that we are better prepared if, as expected, there is a resurgence this winter.

In the most recent session in late August, we heard from Public Health England and local government public health directors who are in the frontline of trying to control the virus.  It was clear from evidence we heard that the isolationism and exceptionalism, which typifies this Government’s attitude, has been problematic all the way through as ministers refuse to learn from other countries’ experiences.

Earlier in the summer, we’d heard from bereaved families and recommended that the prime minister meet with them, as he said he would. Shamefully, he hasn’t yet done so.

I mentioned in my last newsletter that I had written to ministers raising concerns about the huge sums of public money which have been spent on PPE contracts awarded to companies with no track record of supplying medical equipment, and without a competitive tendering process.  That letter is still on my website and I have yet to receive a reply.

I have now joined other MPs in a legal action against ministers to force them to reveal details of these contracts. When the UK has spent far more than other European countries on supplies which have often been found to be defective, the Government needs to provide an explanation as to how the contracts are awarded.  There was a report on the legal action in the Guardian.

The self-employed have been treated appallingly throughout this crisis, many of them left with no income since March.  There is a large parliamentary group for what’s known as ExcludedUK, and we are applying for a backbench debate on the injustices faced by freelancers and the self-employed, and seeking an urgent meeting with the Chancellor.

Ministers have spent this summer stoking fears about the refugees and asylum seekers who have tried to reach our shores in small boats.  Promises from the Home Secretary that the Home Office’s hostile environment policy will be reviewed are sounding very hollow.  I challenged the Home Office minister in Parliament about the rhetoric surrounding the refugees, and the false claims that they have no right to seek asylum in the UK, and suggested the Government start to look at the root causes of migration, including the climate emergency, rather than condemning those who seek refuge here.

The shambles over the A-level results was typical of ministers’ make-it-up-as-you-go-along-and-blame-someone-else approach to government.  Just before the Education Secretary announced that the flawed algorithm for setting grades was being abandoned, I had written to him to highlight the injustices it caused, and I wrote again about the impact on students in Brighton and Hove. Both letters are on my website. I also wrote about the issue in my column in the Metro.

Legal action over the Russia Report

The Intelligence and Security Committee’s Russia report, which has sat on the Prime Minister’s desk since late last year, was finally released earlier this summer and disclosed alarming levels of Russian influence in the UK and attempts to interfere in our elections. We need an independent investigation to protect the integrity of our democracy, which the Prime Minister is refusing. I and other MPs are planning to take legal action if there is no official investigation. You can read more in this BBC report.

I was delighted to be a guest on conservationist Chris Packham’s webcast about protecting raptors like the hen harrier from persecution.  These wonderful birds, some of them endangered, need protection not only from poisoning, shooting and traps, but also from the destruction of their habitats like moorland. A ban on driven grouse shooting would be a good place to start.

I had the privilege of being the first visitor to the Rampion Visitor Centre, located in six newly-refurbished arches near Brighton’s West Pier pillars and looking out over the wind farm.  I hope it will be an important educational resource, spreading the message about the role of renewable energy and inspiring people to take action.  The centre has dozens of displays which tell the story of human settlement, technological advancement and how the wind farm itself was built, as well as a heart-stopping Virtual Reality trip to the top of a turbine. It’s now open for pre-booked visits by groups from one household.

I have spent the last three months working on an exciting initiative in my role as co-chair of the All Party Parliamentary Group on a Green New Deal, developing policies for a fairer, greener future. The project has involved surveys, workshops and evidence sessions with members of the public involved throughout. We’ll be presenting our report to Parliament later this month. Do look out for it.

There’s more information about Reset on the website https://reset-uk.org/