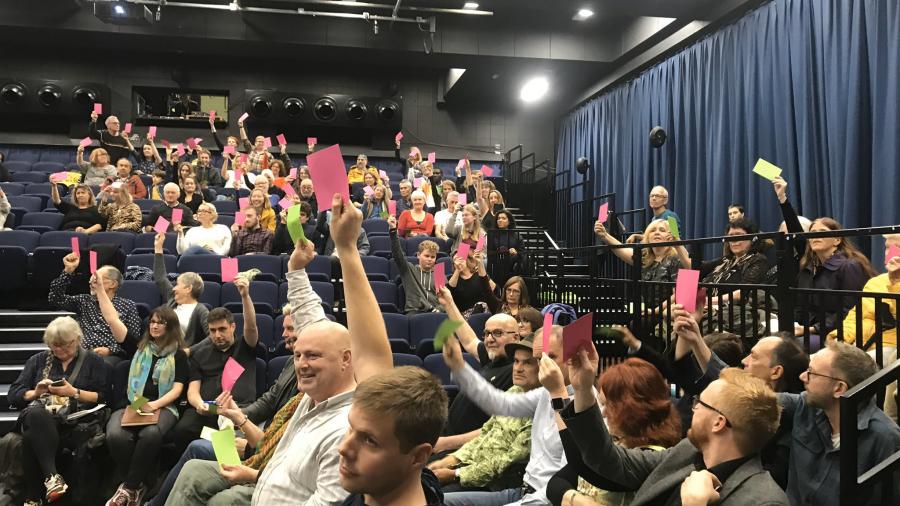 Our first ever People’s Parliament in Brighton was a huge success.  Hosted by the city’s three MPs, myself, Peter Kyle and Russell Lloyd Moyle, we heard lots of great questions and debate on some of the key issues facing the city including not only Brexit, but the climate emergency, affordable housing, youth services and mental health.  All debated with insight and respect for others’ opinions – a real model for how Parliament should be.

Cross party talks to avoid a disastrous crash-out Brexit by Boris Johnson are continuing.  I meet regularly with opposition parties to work for a common approach.  I’m doing all I can to keep up the pressure for a confirmatory vote on any deal so people get a final say on Brexit.

There was lively and informed debate about policies for a Green New Deal at the Friends Meeting House on Saturday, where Green MEP Alex Phillips was chairing a discussion on what the Green New Deal involves, and how it would help address inequality in our society.  There was a strong European flavour to the debate with a former Swedish minister of culture and democracy, Alice Bah Kuhnke, sharing insights about what has been achieved there, and the lessons for Brighton and beyond.

Back in London, the activists of Extinction Rebellion were braving some cold, wet weather - and some disproportionate police response - to remind Parliament that Brexit isn’t the only crisis – we need urgent action on the climate emergency and the threatened collapse of biodiversity.  I visited most of the camps around Westminster, and was inspired by people's passion and commitment.  Many thanks to the XR reforesting team who had a native British tree for every MP.  My choice: a field maple.

I was delighted to formally re-open the Post Office, with new post master Jay Pambhar. I raised the issue of its closure with the Post Office headquarters in London, on behalf of a constituent, so am pleased that they have followed through on their promise to re-open it.  The Post Office plays such an important role in a local community and will make a real difference to people’s lives.   Thank you to Jay Pambhar for taking it on.

A visit to YMCA Downslink in St Georges Place was an opportunity to hear first-hand the significant challenges facing youth services in the context of significant Government cuts.  I came away impressed by the scope of the services offered and inspired by the commitment of the staff who are doing their very best to support young people, many of whom have very complex needs.

I was delighted to support our amazing local charity, RISE (Refuge, Information, Support & Education) by setting off the runners on their 2019 8 km Undercliff Run for Women.  Now in its twelfth year, this was its biggest ever!   RISE do such important work providing refuge and support to those who have experienced domestic abuse.  The race is an important fundraiser for them, and they have exciting plans to make it a zero waste event.

If any of you are readers of the Big Issue, please buy a copy this week!  I was delighted to be invited to be the guest editor and have focused on the state of our democracy.  I’m honoured that so many brilliant people contributed to the magazine, including Yanis Varoufakis on where democracy has gone wrong, Brian May writing a letter to his younger self and pieces from Green MEP Magid Magid and Fatima Ibrahim, co-Executive Director of Green New Deal UK.  We’ve also secured an extract from Naomi Klein’s new book, “On Fire: the burning case for a Green New Deal”.