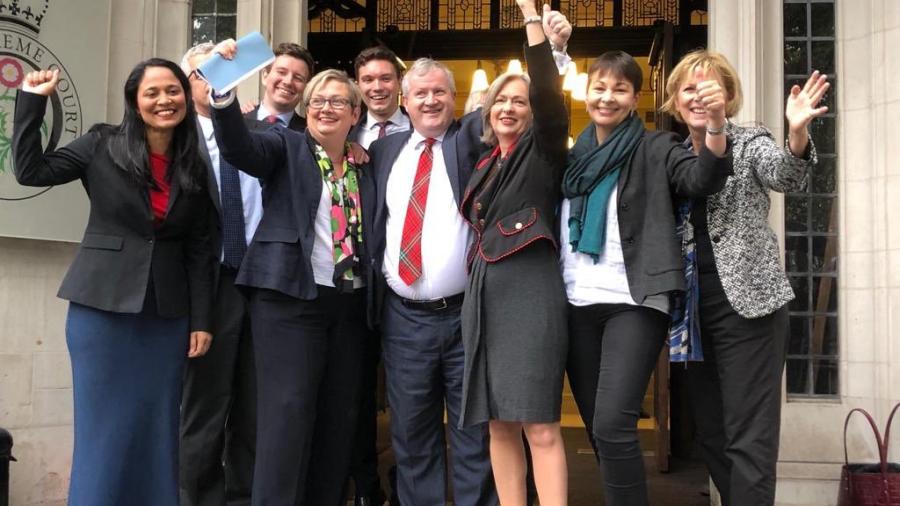 It was really inspiring to see so many people turn out for the climate strike on September 20th.  The crowds were fantastic, with more than 10,000 people demonstrating in Brighton.  It was one of the biggest protests among the many across Britain and sent a really clear message to the Government: we need radical action on the climate emergency, not weasel words and targets that will do nothing to stop climate breakdown.

I was honoured to speak at the Brighton protest and then in London, where I delivered the same message: never believe you don’t make a difference, you are making history now.

The previous weekend, I spoke at an Extinction Rebellion event in New Road.  XR has done so much to put the climate emergency on the political agenda and attracted the support of people from all generations who have grown increasingly concerned and angry about the crisis we face.  It used to feel quite lonely being Britain’s only Green MP.  No more – I feel I have the voices of millions of people supporting me.

Even though the climate emergency is now centre stage, there are plenty of other dangers facing our planet.  I went to talk to the CND group in Reigate about the nuclear threat as well as the environmental dangers.

You will have seen or read about the Supreme Court decision that suspending Parliament was unlawful.  For me, it underlines more than ever why we need a written constitution.  I filmed this video outside the Court shortly after the ruling.

Rise Up and Resist

I joined a Green MEP and some Labour MPs speaking at the Rise Up and Resist Rally, organised by Women4Europe, Brighton & Hove For EU and Best For Britain.  It’s not just the disastrous crash-out Brexit being pursued by Boris Johnson which threatens us, it’s also his contempt for the rules of our democracy.  But we are fighting back and the Rise Up and Resist rally sent a very clear message to Downing Street.

My heart goes out to everyone affected by the horrific fire in Pankhurst Avenue last Friday.   Huge thanks to the Fire Service for all their professionalism, and to Council staff for all their support.  The biggest thanks is to the local community though for all they’re doing.  When I arrived at the Edge Community Centre late on Friday night, blankets and babyhood, hot drinks and food were already being offered.   An online fundraising campaign was started to help the families within hours of the evacuation, typical of the strong community spirit in the neighbourhood.  If you’d like to contribute, the link is here and more information is on my website here

There are still unanswered questions over the fire at the Hollingdean depot last month.  I went to a public meeting on Friday, where residents talked about their concerns over safety at the depot, and asked if it could be relocated to a less densely populated part of the city.   Nick Hibberd, the Executive Director of Economy, Environment and Culture at BHCC, made clear that would be a political decision – not one taken by council officers.  I will continue to press the Council and Veolia for more information about the fire, and the information (or lack of it) that was given to residents at the time.

You will probably have noticed that Labour held its annual conference in Brighton.  I spoke at a fringe meeting organised by the Fabian Society about cross-party collaboration between progressive parties at Westminster.  There may well be a general election this year when it’s vital that Boris Johnson and his right-wing government is defeated.  I joined Labour MPs Clive Lewis and Lisa Nandy and Neal Lawson of the thinktank Compass in discussing how progressive parties could collaborate to help bring this about.

Many of you will have been caught up in the sudden collapse of Thomas Cook, losing your jobs or having your holiday ruined, or with families and friends who have also been affected. The Government have published some information for anyone with concerns here: https://www.gov.uk/government/news/thomas-cook-information-for-customers-employees-creditors-and-shareholders I have also contacted the Secretary of State for Business, Energy and Industrial Strategy, Andrea Leadsom MP, on behalf of Thomas Cook employees who have been in touch with me. I have called on the Minister to do everything in her power to protect Thomas Cook staff and to meet with the relevant trade unions.

It might also be useful to know that GTR have said that tickets booked on Southern, Gatwick Express, Thameslink and Great Northern will be honoured if you travel on a different day to the one you booked.

So much about our housing system is wrong – a lack of social housing, unaffordable rents, private landlords ripping out tenants and soaring prices.  So it’s especially welcome to celebrate a rare housing success story: Two Piers celebrating 40 years of successfully managing the oldest and largest housing co-operative in Brighton and Hove.  More than 1,000 members are part of the housing co-op movement, and Two Piers has supported other co-ops, building the movement and transforming people’s lives.  It was a real pleasure to join their birthday celebrations and meet their founder, Brenda Boardman.

More on homes … The Brighton Housing Trust is organising a free concert (piano and violin) followed by a discussion about homelessness led by its CEO Andy Winter at the Friends Meeting House in Brighton on September 27th.  It starts at 1pm.

Network Rail needs to take action and install appropriate netting to stop pigeons getting trapped and creating the mess. We also discussed the road layout and safety concerns.  I’ll be following up on this with BHCC and/or Highways England.

I spoke at a rally on the seafront of Cascade Creative Recovery, a community based charity that helps people who have misused drugs or alcohol to maintain their recovery.  It was stimulating discussion on how to challenge the stigma of drug or alcohol addiction and make recovery a positive choice.  The charity does great work, battling against the impact of cuts to drug and alcohol services.

This beautiful flower is native to the South Downs but threatened by air pollution and habitat loss.  I am its “species champion” so it was a real pleasure to set out  on a glorious late summer day to look for it on the South Downs, in the company of Carole Mortimer from Natural England and Jenny Hawley from Plantlife, both fantastic organisations doing so much to protect our wildlife.  We found it!  And I was shown so many other things I’d never have spotted on my own. Well worth the hike.