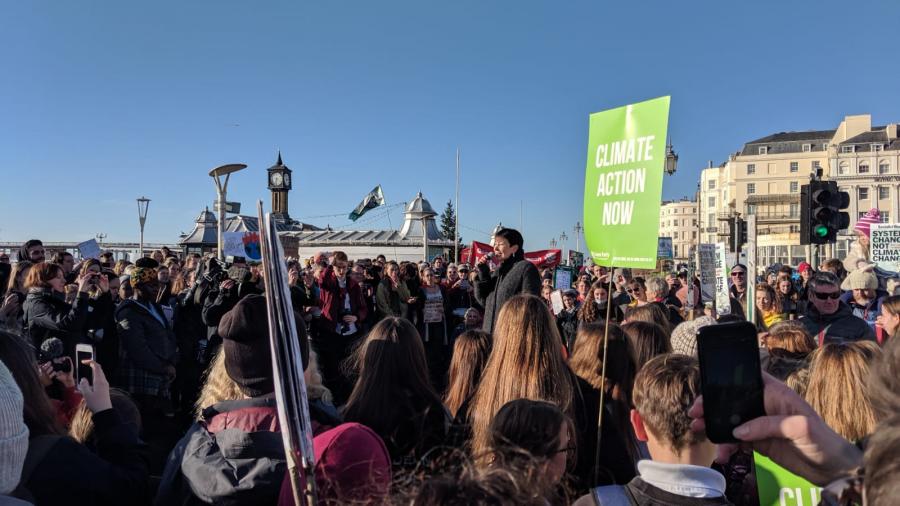 Being the sole Green MP in Parliament has sometimes felt like a lonely job.

But every time I see young people taking to the streets like you are today I don’t feel lonely.

I feel among hundreds of thousands of friends here in the UK - and millions more across the world - who see the reality of the climate emergency.

And who won’t stop until our political leaders do too.

Yesterday, for the first time in UK history, we had a general election leaders’ debate on climate change.

Your movement made that possible.

So never, ever believe those who say your actions don’t make a difference

This week the UN told us that emissions around the world are still rising.

And that the gap between our current pathway and a safe one is becoming a chasm.

In 2019 we’ve seen the alarm bells of climate emergency ring out louder than ever before:

Our struggle is growing impossible to ignore.

But still some people try.

They bury their heads in the sand and stick their fingers in their ears.

They’d rather we didn’t talk about it.

So let’s keep growing louder until even those with their heads in the sand are deafened by our cries.

I am so sorry that you are having to miss out on education in order to try to secure your futures.

I’m so sorry that my generation has let down yours.

The Green Party has done all we can for many decades to force the climate emergency onto the political agenda.

Thanks to your leadership, we’ll do all we can to keep it there.

The political situation in this country has rarely felt less certain.

But today I want to pledge to you that whatever happens, the Green Party will continue to work towards a radically different future.

And Green MPs will continue to lead the campaign in Parliament for a Green New Deal and a safe future for us all.

Don’t ever let people say that taking part in protests like this doesn’t make a difference.

You have already made history.

And together, we are more powerful than they can possibly imagine.