search mobile
Is it profitable, is it possible, is it legal? 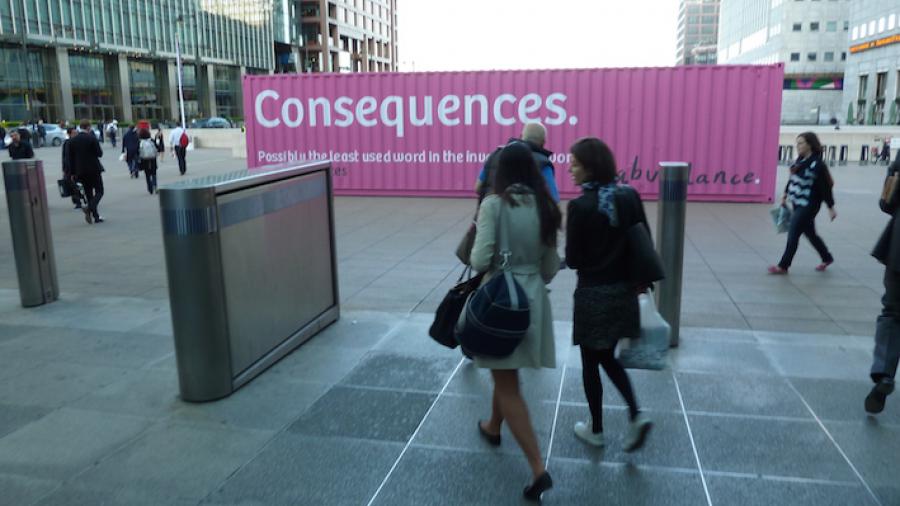 Anyone in and around Canary Wharf today may spot the presence of a large pink shipping container. Emblazoned on the side is the following message: Consequences. Possibly the least used word in the investment world. It’s part of a radical new campaign by ethical investment champions Abundance, and is designed to challenge the financial sector to think hard about the impact of their investment decisions.

Bruce Davies, founder of Abundance, puts it like this: A lot of the debate around ethics takes place in the bubble of the City which has a rarefied view of profit and consequences. The old Goldman Sachs adage, ‘Is it profitable, is it possible, is it legal?’ reflects a world that is increasingly investing in itself and is cut off from the attitudes and behaviours of ordinary investors and savers.

He cites the Great British Money Survey 2015, which found that the majority of us don’t want our money invested in unethical activities – and that includes tax avoidance, child labour, pornography and fossil fuel extraction.

The Consequences campaign is hugely welcome, especially as it recognises that in the case of investment in fossil fuel extraction, there is growing awareness of the economic risks, as well as the environmental ones. As the planet warms, the carbon bubble of overvalued assets gets closer to bursting point, with grave and unparalleled consequences for a financial sector reliant on fossil fuels.

Enlightened self-interest gets us so far, but we also urgently need a better regulatory regime. This should give the financial sector incentives to invest more ethically and a degree of predictability, reducing the risks for them. Despite fine words from David Cameron about eg clamping down on international tax dodging, the reality is still one in which this kind of unethical activity is the bread and butter of the financial sector. It’s time Government listened to the majority of investors and put its money – as well as theirs – where its mouth is. We live on a planet of finite resources and, on those grounds alone, ethical investment is the future. The finance industry, and those responsible for regulating that industry, need to start asking not “Is it profitable, is it possible, is it legal?” but “Is it ethical, is it sustainable, and what are the social and ecological consequences?”