search mobile
Hope and despair in the Paris climate deal – but what next? 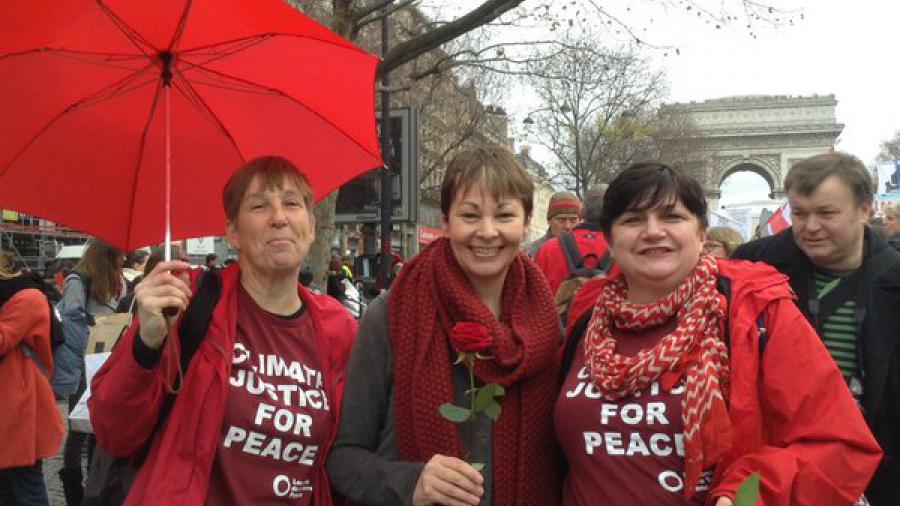 Hope and despair in the Paris climate deal – but what next?
Monday, December 14, 2015

Over the last 24 hours or so I’ve been looking closely at the final agreement from the COP21 talks in Paris. It’s fair to say, I think, that the deal struck has been met with celebration and condemnation in equal measure.

On the positive side, there’s recognition of the need to take action to cut carbon emissions more dramatically between now and 2020, when the agreement itself kicks in. Almost 200 countries have agreed that we must seek to limit global warming to 1.5C. That’s a crucial recognition that a 2C temperature rise is a death sentence for many communities – even some countries – meaning misery and hardship for millions more.

This shows that the voices of the Global South and of ordinary citizens are, at times, being heard - over the thundering roar of the rich fossil fuel corporations’ lobbying machines.

On the negative side, the agreement lacks a roadmap for the actions that will achieve a safe climate or adequate help to those most vulnerable to droughts, storms, and sea level rise.

When it comes to securing a safe climate for our children and grandchildren – and for the communities at the frontlines of climate disruption and fossil fuel extraction – it’s deeds not words that matter the most.

That’s what makes the UK Government’s shameless, self-congratulatory rhetoric on the Paris climate agreement quite so inexcusable.

Many businesses are recognising the need, and advantage of shifting to post-carbon economics. As James Murray, editor of business green wrote recently:

“From the tech billionaire's multi-billion dollar R&D commitments to the states and cities detailing plans to cut emissions by a level equivalent to the total current emissions of China. From the development banks unleashing billions of dollars of new climate funding to the various sector alliances promising to accelerate the development of solar power, green buildings, zero emission vehicles, and various other clean technologies. From the Financial Stability Board's climate risk disclosure commitment to multinational firms sourcing all their power from renewables. It is increasingly clear the shift in corporate engagement with climate change that has been gathering pace for the past decade is finally starting to come of age.”

It's within that context that UK energy and infrastructure policy is going in completely the wrong direction – cutting support for renewables and efficiency, locking in high-carbon gas for decades to come, and squandering taxpayers’ money on new nuclear, new roads and runways.

To make the Paris agreement meaningful, we now desperately need a clear plan for 100% renewables by 2050, action to keep fossil fuels in the ground from this point forwards, and a redoubling of efforts  - from politicians and campaigners – to force the system change that will deliver climate justice for all.

More inspiring than the the deal itself has been the global climate movement that has come together in Paris and across the world like never before.

As politicians were cheering their compromises – and the agreement is unquestionably a diplomatic triumph – I joined citizens, campaigners and community activists in setting out our red lines for a just and liveable climate across the heart of Paris.

These are the red lines against which we must measure not just the Paris agreement - but the actions of Ministers now back in the UK.

If politicians do not act with honesty and integrity on climate change, we’ll end up on the same side of history as the fossil fuel corporations who’re blocking progress. One step in the right direction isn’t the same as reaching your destination.

Here in Westminster, that needs to start with a complete re-write of the current Energy Bill, which finished its House of Lords stages last month. This takes forwards the new duty to maximise the economic recovery of oil and gas – and ends subsidies for onshore wind.

It’s painfully obvious that we should instead be maximising the huge potential to harness Britain’s rich and varied renewable energy resources, and ending subsidies for fossil fuels.

It’s difficult to think of a piece of legislation that is less fit-for-purpose, if the Government were serious about turning warm words in the Paris climate agreement into action.

Perhaps it’s little wonder that the Government decided to delay the Bill’s second reading in the Commons until after the Paris climate talks were over.

Yes, the UK’s coal fired power stations must be phased out – but they must be replaced with renewable energy - not gas. That means rethinking the raft of mind-bogglingly backward policy decisions we’ve seen since the election – reversing solar subsidy cuts and reinstating the zero carbon homes policy for starters.

That should be the focus of any Energy Bill in 2016. The Paris climate agreement provides an even stronger case for MPs to refuse to give the Bill a second reading, reject it in its entirety, and demand the Government goes back to the drawing board.

Looking ahead to 2016, we’ve got some big fights to come. The climate movement will have a key role to play in holding politicians to account.

The Paris climate talks failed in part because of the influence of fossil fuel corporations over government. Those same oil and gas companies have a death grip on the UK’s democratic decision making too. Nowhere is this more obvious than the trade deals being struck, which threaten to undermine efforts to cut carbon emissions as well as our democracy.

But the strength and breadth of the mobilisation across civil society we are seeing is more powerful than corporations and their friends in Government realise.

As the New Internationalist put it:

“If the climate justice movement can seize these opportunities in 2016, victories could snowball, leading to a significant change in the political context in which future climate negotiations take place. Imagine a COP where industrialized countries are no longer beholden to fossil fuel giants, and democratically-controlled renewable energy is the main game in town. Imagine a COP where the voices of frontline and affected people hold more sway than the demands of the corporations. Then, and only then, might we get a climate deal worthy of the name.”

Unusually, a similar sentiment was to be found in the Economist, with their verdict on Paris concluding:

“Genuine concern about the climate, public opinion and international pressure produced the pledges that were made for Paris. The hope is that similar bottom-up processes, rather than unenforceable UN mandates, will drive up the level of action in decades to come.”

That is cause for hope.