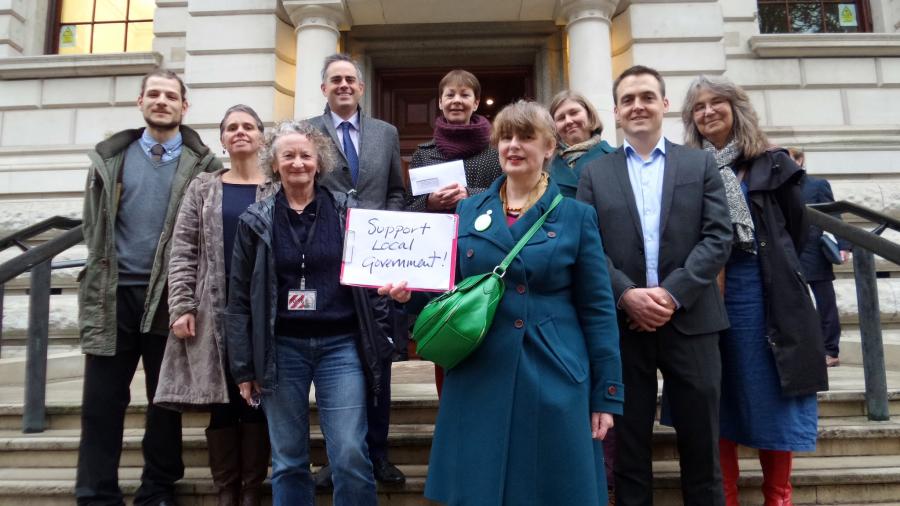 Greens call for an end to local Government cuts ahead of Autumn Statement
Tuesday, November 15, 2016

The Green Party co-leaders, Caroline Lucas & Jonathan Bartley, have joined a group of councillors in demanding that the Government reverse planned cuts to local authority budgets.

Lucas, Barley and a group of their party’s councillors handed a letter to the treasury on Monday asking the Government to plug the core funding gap of £5.84 billion that the Local Government Association (LGA) says councils face between now and 2020. In the letter the group say that reversing the planned cuts is essential to protect ‘frontline services such as support for users of adult social care, older people, those with disabilities or special educational needs, survivors of domestic violence, and low-income families in crisis.’

Lucas has also tabled an early day motion [2] in Parliament on the same issue. Speaking after handing in the letter [1] she said:

“Our party is united in opposition to these planned cuts. Local authorities are already straining under the intense of pressure of year on year cuts and this further squeeze will put frontline services in the firing line. The Government can stop these cuts – and protect these essential local services – but that would mean ending their ideological love-affair with the failed austerity project. We are urging Philip Hammond to be brace in his first Autumn statement and pledge to safeguard our vital local services from any further harm.”

That this House notes the finding of the National Audit Office[1] that the Government has reduced its funding to local authorities by 37% in real terms, between 2010‑11 and 2015-16;  further notes the cross-party Local Government Association (LGA) has estimated that the overall funding gap to councils will amount to £5.842 billion by 2019/20[2]; considers this poses an ongoing risk not just to cherished community services, but to essential frontline services such as support for users of adult social care, older people, looked-after children, care-leavers, those with disabilities or special educational needs, survivors of domestic violence, and low-income families in crisis; also notes that, in addition to increases in local council responsibilities, central Government policies, such as the bedroom tax, the freeze on Local Housing Allowance rates, cuts to social security payments, including for disabled people, counterproductive public health budget cuts, and the continued 20% rate of regressive VAT, are increasing demand for council services; believes the cumulative effect is slowly but surely putting an end to local government as we know it; and calls on the Government to put in place the funding necessary to protect local government services and allow councils to restore spending on community and frontline services to sustainable levels.