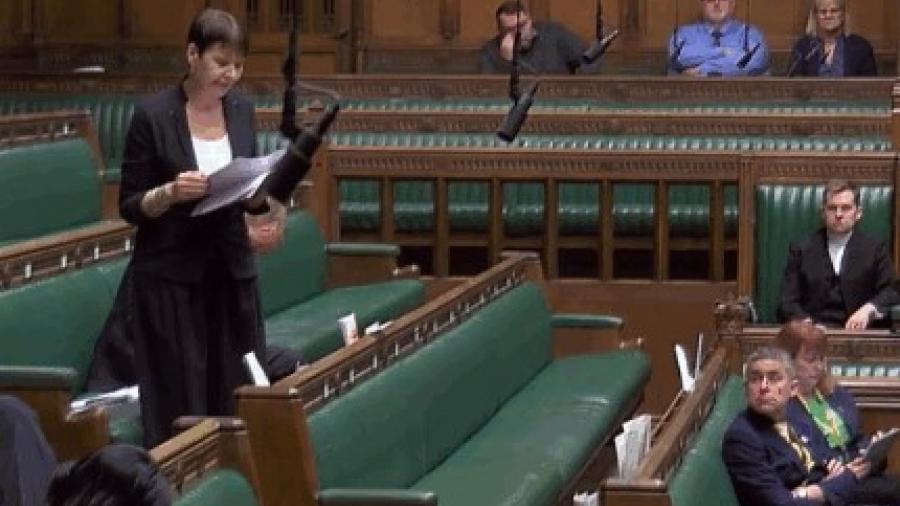 Every day there is new evidence of the increasing scale of the climate emergency.

And new scientific analysis shows ocean temperatures have hit a record high as the rate of heating of our planet accelerates.

Yet despite this flood of irrefutable and overwhelming evidence, the UK continues to do far too little, far too late to cut greenhouse gas emissions from every sector of our economy.

We’re not on course to meet our legally binding 4th and 5th carbon budges which were set as part of the ambition to reduce GHGs by 80% - now the target is net zero, the shortfall will be even larger.

In this year when the COP 26 climate talks will be hosted in Glasgow, it’s time to demonstrate real climate leadership, not just talk about it.

So whilst I welcome this Government’s decision to invest in a green industrial revolution, I want to set out how their approach is not up to the task at hand in 3 fundamental ways.

Firstly, we need Ministers to start speaking the truth.

The Prime Minister has claimed that the UK is leading the world on tackling climate change.

That greenhouse gas emissions have fallen 42% since 1990.

But the Government’s own figures show that if you calculate emissions based on consumption, over the past 20 years they have fallen just 10%.

What’s more, historic reductions are no indicator of future progress.

Coal is all but gone from the power sector. This means that the biggest source of reductions so far has now been exhausted.

In their 2019 Progress Report, the Committee on Climate Change said:

“For the fifth consecutive year, the sector with the largest percentage reduction in emissions was the power sector. Excluding the power sector, economy-wide progress was much less positive”.

The truth is that if this Government’s green revolution includes spending on new roads, on bailing out failing airlines and aviation expansion, they are part of the problem, not the solution.

In an emergency, when your house is on fire, you don’t dial 999 and ask for the fire engines to come in 30 years times – action has to happen now.

And a target on its own does not bring down emissions. Action does.

Yet the Committee on Climate Change warn “actions to date have fallen short of what is needed for the previous targets and well short of those required for the net-zero target”.

And let’s examine what the ‘net’ in net zero means –  it means positively heroic (for which read criminally reckless) assumptions about the potential for Negative Emission Technologies to suck carbon out of the atmosphere.

These technologies are mostly yet unproven and in some cases entirely unknown – so let’s be very clear that what we’re doing is simply passing the buck to our children.  We’re leaving it for them to sort out.

Frankly I don’t think that’s a moral position to take.

Our targets also rely on our taking for ourselves a much larger slice of the global carbon pie than we are entitled to.

We’re on course to emit about 2% of the remaining safe carbon budget - even though our populations accounts for only about 0.9% of the global population.

Not only that, but historically, we’ve been taking more than our share too.  We’ve emitted around 4.4% of the world’s historic fossil fuels and industry emissions – again around 5 times our ‘fair share’ of the historic carbon budget given our percentage of world population.   This legacy of colonialism has to stop.

I think we also need to be clear that the primacy of GDP growth as the overarching priority for the economy is the elephant in the room.

Our house is on fire, and it’s blocking the door to the emergency exit, and devouring our efforts to decarbonise.

Jason Hickel, a leading environmental economist at Goldsmiths, has explained this by examining IPCC trajectories on reaching net zero by 2050.

During that very same period, the global economy is set to nearly triple in size. That means three times more production and consumption than we are already doing each year.

It’ll be hard enough to decarbonize the existing economy in such a short timespan. It’s virtually impossible to do it three times over.

If we carry on with growth as usual,  halving emissions by 2030, as the IPCC has made very clear we must do,  would require decarbonisation of the economy at a rate of 11 percent per year.

And let’s explode the myths around the possibilities of endlessly extending the concept of ‘green growth’ – which relies on the assumption that you can achieve full and adequate decoupling of economic growth from environmental harm.

Although decoupling is useful and necessary, and has occurred at certain times and places, ‘green growth’ cannot reduce resource use on anywhere near the scale required to deal with global environmental breakdown and to keep global warming below the target of 1.5C above pre-industrial levels.

The IPCC have set out one lifeline scenario that does not rely on speculative and harmful negative emissions technologies to keep global heating to 1.5 degrees.

That scenario is our emergency exit from climate breakdown.

What does it look like? Fundamentally, it’s about scaling down material consumption – by 20% globally, with rich countries like the UK leading the way.

Transitioning away from the growth dogma is not about hurting people’s welfare, quite the opposite.  It’s about placing wellbeing centre stage – reducing inequalities, cutting out waste and inefficiencies, and prioritising quality of life over quantity of things.

Instead of measuring progress in terms of GDP growth, we need to shift to indicators that tell us far more about whether people have higher wellbeing, whether there’s clean air and clean water, whether we have a safe atmosphere, whether we close the gaping inequalities which diminish us all.

That’s what leadership in today’s climate reality looks like and should be the primary purpose of every single aspect of Government economic policy.

And that’s where the Green New Deal comes in.

The scale of the climate emergency requires much greater ambition. It requires a Green New Deal – and myself and my colleague the Hon Member for Norwich North have worked cross-party to set out, in a Private Members Bill which we intend to reintroduce this parliamentary session, exactly what this looks like.

In the process of transforming the infrastructure of our society at the speed and scale the science demands, we have a once in a generation opportunity to fix an economic model that is failing the vast majority of people.

At the heart of the Green New Deal is the recognition that the current climate, nature and inequality crises are all driven by the way that our economy and finance system is managed – and that this has benefited a very small number of people and a few giant corporations, with the price being paid by the rest of us, and by the earth we share.

That won’t be fixed by the Chancellor’s decade of renewal.

It won’t be fixed by an acceleration of business as usual.

Because it’s business as usual that has got us where we are.

Unless that decade of renewal is targeted on the transformation needed to move us to a world beyond carbon, all of that investment will be washed away long before the decade is out.

And that requires a redistribution not just of resources but of real power, starting with those communities who have been most excluded from prosperity in the past.

The transition we need is not just to net zero, but to a new kind of economy.

The Green New Deal is a transformational work programme to transform everything from the way that we produce and consume energy, heat and cool our homes, move from place to place, connect our communities, the way we grow our food and the way we work.

It would create jobs and generate income, including tax revenues for government.

A real revolution that will enable us to transform our society so that it is fairer, more democratic and works better for all of us – here and around the world – while safeguarding and restoring the ecological systems on which we all depend.

With the window for making a difference rapidly closing, what we do in the next 18 months is literally life changing – for all life on our planet.

The world’s addiction to fossil fuels started here in the UK as the birthplace of the industrial revolution.

We have built our economy, prosperity and society on the over-consumption of a finite resource – the earth’s atmospheric limits.

Our share of causing this emergency was vast. We must now do our fair share in addressing it.