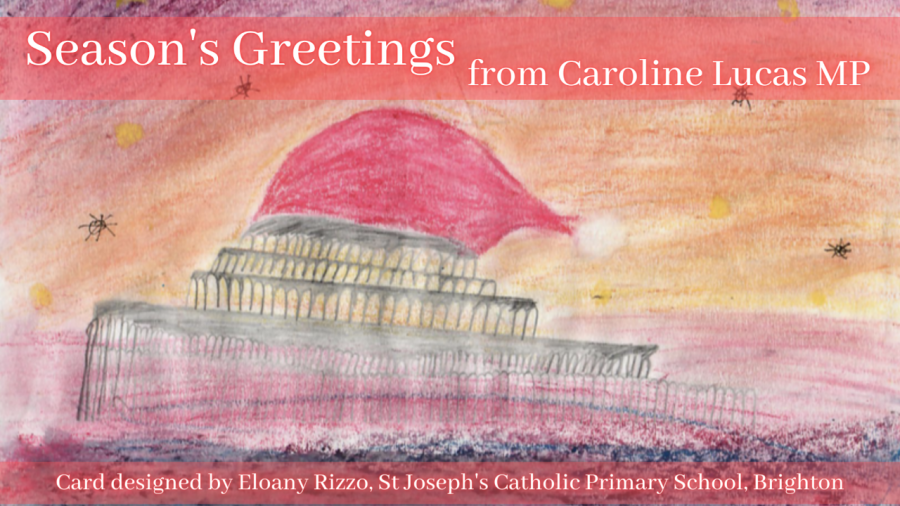 Only a year ago, I was writing in my Christmas newsletter that 2020 had been the most extraordinary year for all of us.  I never imagined then that as 2021 draws to a close, we would be entering yet another phase of the Covid pandemic with the new Omicron variant, more necessary measures to keep people safe and the prospect of more heartache. But I know that the compassion and sense of community that people have shown over the past two years will pull us through the challenges that Covid continues to throw at us.

LOOKING BACK AT ANOTHER YEAR OF COVID

While 2021 has been a year of lockdowns, easing of restrictions, severe pressures on our NHS and a phenomenal vaccine rollout, it’s also been a year of holding the Government to account for its handling of the pandemic.

I was part of a legal action against the Government over secretive PPE contracts which went to the High Court in February. We won the case, with the Court ruling that the Secretary of State for Health had broken the law by failing to publish details of Covid-related contracts.  When billions of pounds has been spent on these contracts, much of it without a competitive tender, we have a right to know who got contracts, why they got them and how much they were paid – information that the Government has not published in full.

As a member of the All-Party Parliamentary Group on Coronavirus, I’ve been involved in a number of inquiries into the impact of the virus. One of the issues we looked into was Long Covid, which affects as many as 300,000 people in the UK.  We called for more public funding for research, a Long Covid compensation scheme and better support for people suffering from it.

The rise of the Omicron variant also underlines how important support for businesses is – the Chancellor’s silence is completely unacceptable. I’ve urged the Government to commit to a continued low rate of VAT, extend and expand business rates relief (with council reimbursed), new grant programmes, a proper self-employed income support scheme and flexibility over repaying existing loans.

I’ve spoken out and written about the inequity of the Covid vaccine rollout which has seen rich nations procure enough doses to vaccinate their populations many times over while poorer ones are left to pick up the crumbs. I have pushed the Government to waive the intellectual property rights for Covid vaccines at the World Trade Organisation so they can be manufactured in the global south and made more widely available.

Shamefully, the UK government is among a small group of countries which continues to resist this, putting the profits of Big Pharma before global health.

The most important event on the climate emergency this year was the COP26 UN climate summit in Glasgow.  The final agreement fell far, far short of what’s required in terms or ambition or urgency and failed to deliver climate justice to countries on the frontline of the climate crisis, with broken pledges on climate finance and no compensation package for the loss and damage that those countries are suffering now. I spent just over a week in Glasgow, where I joined 100,000 people in Scotland’s biggest-ever protest on the march for climate justice, and took part in a number of side events at the summit.

I wrote comment pieces for the iPaper, the Evening Standard and the Independent.  In my column in Metro, I summed up what I thought the summit had, and hadn’t, achieved.

In the run-up to COP26, I led a debate in Parliament on the climate emergency and limiting global temperature rise to 1.5C.  I introduced the Green New Deal bill, to decarbonise the UK economy and reverse inequality, and I continue to promote the Climate and Ecological Emergency Bill, which I introduced as a private member’s bill last year.  It now has the support of 118 cross-party MPs. I also led the first-ever Commons debate on a wellbeing economy approach to tackling climate change – the issue that was glaringly absent in the COP26 negotiations.

For the past 2 years, I have been working as a Co-chair of IPPR’s Environmental Justice Commission, to listen to ideas put forward by a number of Citizens’ Juries around the UK and then to make proposals on how we transition in a fair way to net zero emissions and restore nature.  Our report, published in July, made clear that there must be a “fairness lock” on the essential changes to come as this is key to winning public support.  If governments take a people-first approach with direct public involvement in decision-making, the shift to a zero carbon future could deliver better transport, good new jobs and better health and wellbeing.

The persistent allegations and instances of Tory sleaze are doing huge damage to our democracy – the scandal over parties held at Downing Street last year when the country was in lockdown are just the latest evidence of this Government’s attitude of one-rule-for-us-another-one-for-everyone-else. We’ve had the lobbying scandal, questions over the refurbishment of the Downing Street flat, the Government’s attempt to change the rules to protect one of their own and, in many respects worst of all, the Prime Minister’s persistent failure to tell the truth to Parliament.  Misleading the House used to be an automatic resignation issue. Under Boris Johnson, it’s being normalised with no consequences as he is the ultimate arbiter of the Ministerial Code.

Earlier this year, I joined five other party leaders at Westminster writing to the Speaker calling out the Prime Minister’s conduct and asking that we be allowed to bring a motion challenging his failure to give accurate information to MPs.  I also raised this a number of times in Parliament and wrote about it in my Metro column.  The rules for governing conduct in public office need to change.

It’s hard to remember a year when more draconian bills have been put before Parliament which pose real threats to basic democratic rights and freedoms.  I have spoken out against all of them.

The Policing Bill would restrict the right to peaceful protest, hand huge powers to the Home Secretary and give police the right to ban protests which are too “noisy” or cause “serious disruption” – my speech against it is here, and I also challenged the PM at Prime Minister’s Questions; the Nationality & Borders Bill criminalises refugees who reach our shores by anything other than an official route (most of which have been closed down) and gives the Home Secretary the right to deprive someone of their UK citizenship without even telling them; the Elections Bill is a blatant attempt to deny people without photo ID the ability to vote and ends the PR system for the only elections in England which aren’t run on the deeply unfair first-past-the-post system – I wrote about a column for the Independent about the dangers this bill poses to democratic rights.

Other important bills which I have opposed or tried to amend are the Fire Safety Bill, which leaves leaseholders in buildings under 18 metres to pick up the costs of fixing unsafe cladding and fails to address other fire-safety issues which affect residents in a number of blocks in Brighton; the NHS Bill which gives private health care companies including US health giants a foothold in our NHS; and the Environment Bill which weakens environmental protections we once had and creates a new regulator who is not fully independent of ministers.

The sudden fall of Kabul to the Taliban in August has created a huge humanitarian crisis.  Like many MPs, I’ve been inundated with desperate pleas for help from constituents who have close family members trapped in Afghanistan or who are trapped themselves. The Government’s response has been lamentable, with the promised Afghan Citizens Resettlement Scheme still not operational four months after it was announced.  My Early Day Motion on this has support from MPs of all parties.  I held a special face-to-face surgery in September and have raised the issue of family reunions and the plight of refugees in the Commons with the Prime Minister and the Home Office.  During the emergency debate in August, I spoke about how the Nationality & Borders Bill would criminalise, or deny full refugee status to, someone fleeing Afghanistan and making their own journey to seek asylum in the UK and wrote about this too.

OTHER WORK IN THE CONSTITUENCY

Throughout the year, I’ve tried to support constituents to resolve some of the issues and problems they face.  The messages I receive from them sometimes highlight further national policy flaws that need changing.  At other times, I try to support individuals who are battling organisational bureaucracy in their attempts to resolve disputes with various companies or government departments like DWP and HMRC.

I’ve been able to help constituents who have been victims of fraud to recover money from their bank and I’ve pushed HMRC to resolve a dispute over a historic and wrongly calculated £2,000 tax credit 'overpayment'.  But this year a lot of my time has been spent trying to chase up processing delays. Covid has stretched many Government agencies even further, leaving the DVLA, the Probate Service, HMRC, the Home Office, and many others at breaking point. The impact of this can be significant, so I’ve tried to support constituents in getting applications processed, documents returned and cases expedited on compassionate grounds.

One of my biggest concerns locally, which is reflected in my constituency case work, is the crisis in child and adolescent mental health services (CAMHS).  I'm continuing to do what I can to support constituents, as well as looking for opportunities in my parliamentary work to keep this urgent issue on the agenda.

In July, I went out with Greenpeace activists to see for myself the huge damage being caused by fly-shooting fishing trawlers in the seas off Sussex – an area which is designated as a Marine Protected Area but where this destructive form of fishing is still legal.  It was shocking to see how the huge nets trap everything in their wake leaving the area a virtual marine desert.  Government pledges to protected 30 percent of land and marine areas for nature are meaningless if this kind of fishing is allowed to continue.

I’ve appeared on BBC, C4, C5 and Sky news programmes as well as local news outlets over the past year.  I’ve written comment pieces for the Guardian, Independent, iNews, Prospect, New Statesman and other publications.  I write fortnightly for Metro and have a monthly column in the Brighton & Hove Independent.  Thank you to everyone who follows me on Twitter, Instagram or Facebook.

Finally, thank you to every organisation in Brighton which has welcomed me to their workplace or home, or invited me to attend an event in the past year.  Representing Brighton Pavilion in Parliament is a huge privilege and meeting constituents is one of the best things about the role.

Wherever and however you are celebrating, I wish you all a happy Christmas and a peaceful New Year.