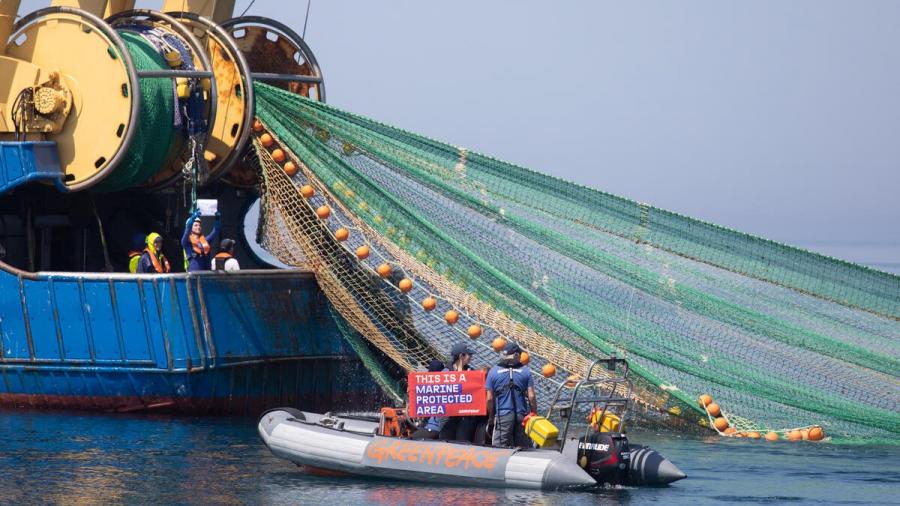 One of the issues about marine protection is that, too often, it’s out of sight out of mind. If you saw bulldozer going into a nature reserve and churning it up, people would be outraged. But because it’s happening out at sea, and to most people is invisible, it feels like it’s not on anyone’s agenda.

So I joined a group of Greenpeace activists on board Ocean Witness to see for myself what’s happening to the seas off the coast of Sussex.  This is a Marine Protected Area, which should give some protection to sea life.  But it doesn’t and some of the most destructive form of fishing is happening here.

Last month, Greenpeace revealed that bottom trawlers spent 68,000 hours fishing in UK protected areas in 2020.  A staggering 97% of protected areas were bottom-trawled in 2019 – an activity which is actually legal because the Government has failed to implement restrictions on industrial fishing methods in the MPA network.

The Offshore Brighton MPA was the 4th most heavily bottom-trawled UK protected area in 2019.

It’s not the only form of destructive fishing.  Fly-shooting boats tow lead-weighted ropes along the seabed at either end of a net that encircles and captures entire shoals of fish.  The number of boats in the Channel using this form of fishing has ballooned in recent years. It is not sustainable and is destroying other marine life.

But when I raised this with ministers in Parliament, I was told that fly shooters had a lower environmental impact than other gear types because they could be operated from lower-powered vessels with lower fuel consumption.  This is not good enough.

The Government has pledged to protect 30 percent of land and marine areas by 2030 but this is meaningless if this destructive form of fishing is allowed to continue.  The sea bed is being scraped clear of any marine life, leaving ocean deserts.

So it needs to do more, and urgently.  As a start, fly shooting and other destructive forms of industrial fishing should be banned in marine protected areas.