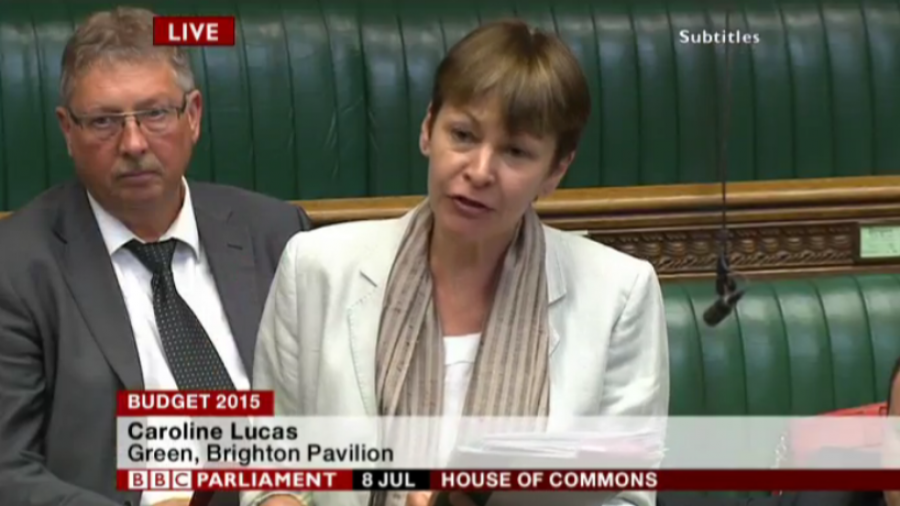 Caroline Lucas has labelled today’s emergency budget as ‘cruel and counterproductive’ after the Chancellor announced deep cuts in welfare spending and failed to propose serious action on climate change.

“This cruel and counterproductive budget is dire news for people in Britain and a serious blow to the Government’s already stained record on climate change.

“The welfare cuts announced today will plunge thousands of people in poverty, and cause families to be evicted from their homes. I’m deeply concerned that my own constituents are set to face needless hardship as this Government continues its economically illiterate and utterly unjust mission to hack away at our welfare state and public services.

“This Government’s ideological obsession with welfare cuts is gutting our social security system. It’s now vital that the Labour Party quickly rises from its post-election slumber and fulfils its job as the official opposition – giving in to the Tories on an issue like the benefits cap cut would be an utter betrayal of the many people in Britain who are struggling to get by.”

Caroline labelled the budget as a ‘serious blow’ for the fight against climate change.

"There is an enourmous climate shaped hole in this budget.”

“Ministers know that climate change presents a huge threat to our economy and national security - not just to public health and our environment.  Yet George Osborne has refused to change direction and, in axing the climate-change levy exemption for renewable electricity and committing to further funding for road building, he’s putting progress on climate change in jeopardy . We’ve seen yet another example of reckless short-term policy making that prioritises the profits of polluters over the public interest in a safe and habitable climate."

Caroline is calling for a ‘radical overhaul’ of inheritance tax policy so that levels of taxation depend on the wealth of the recipient, not the donor.

“The plan to raise the inheritance tax threshold will, according to Treasury’s own analysis, benefit high income and wealthy households.

“Only five constituencies in the entire country have average house prices above £1m – all of them in London. The rise in the threshold will benefit just the wealthiest, at a time when we’re seeing swingeing cuts to our welfare state.

“Given that at present inheritance tax is one of the easiest taxes to both avoid and evade, and the very rich often find ways of paying very little –it’s clear we need to radically rethink the whole policy.

“The level of the tax should depend on the wealth of the recipient, not the donor, so that, for example, all bequests to individual recipients who have less than around £200,000 should be tax free. This would encourage people to spread their wealth more widely.”