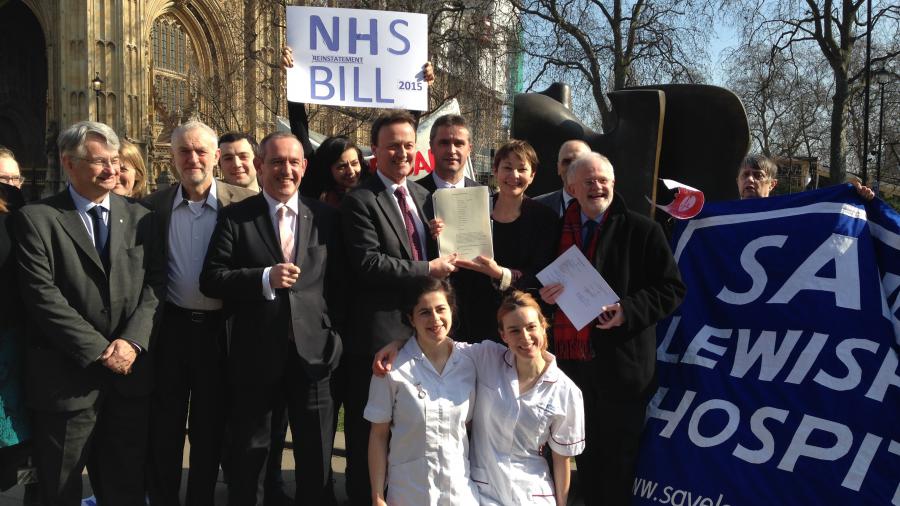 Caroline will today present a cross-party NHS Reinstatement Bill in Parliament, with backing from John Pugh (Lib-Dem), Philippa Whitford (SNP) and Jeremy Corbyn, one of the candidates for the Labour leadership. The Bill seeks to reinstate the NHS based on its founding principles and reverse the creeping marketisation of the health service. [1]

The Bill reinstates the Secretary of State’s responsibility for the provision of services, something the Health and Social Care Act 2012 (HSCA) severed.  The Bill would strip away the costly market mechanisms that waste NHS money, allowing it to be spent on patient care instead.

Caroline’s bill, which was backed last week by the British Medical Association [2], has gained cross-party support from backbenchers [3] from Labour, Plaid Cymru, the SNP and the Liberal Democrats. Labour’s frontbench is yet to commit – and, of the four leadership candidates, only Jeremy Corbyn has so far backed the bill.

Ahead of the presentation of the Bill, set to take place later today, Lucas is calling on all Labour leadership candidates to publicly back the Bill and as a last stand in defending the National Health Service.

“The NHS we love is facing an existential threat. The creeping privatization of the last quarter of a century has introduced the fragmentation and the inefficiencies this brings into our health service.

“It’s time to take a stand for our NHS. I’m honoured to be presenting the Bill today with such strong cross-party support but, to take the campaign for a truly public NHS to the next level, it’s vital that the Labour Party comes forward to back the Bill.

“I hope all other Labour leadership candidates follow Jeremy Corbyn in standing up for our NHS and backing the Bill.”

[1] The full text of the bill will be available on Thursday. More details can be found here:http://www.nhsbill2015.org/

[2] The BMA voted to back the bill at their conference last week.

[3] The twelve sponsors of the NHS Reinstatement Bill