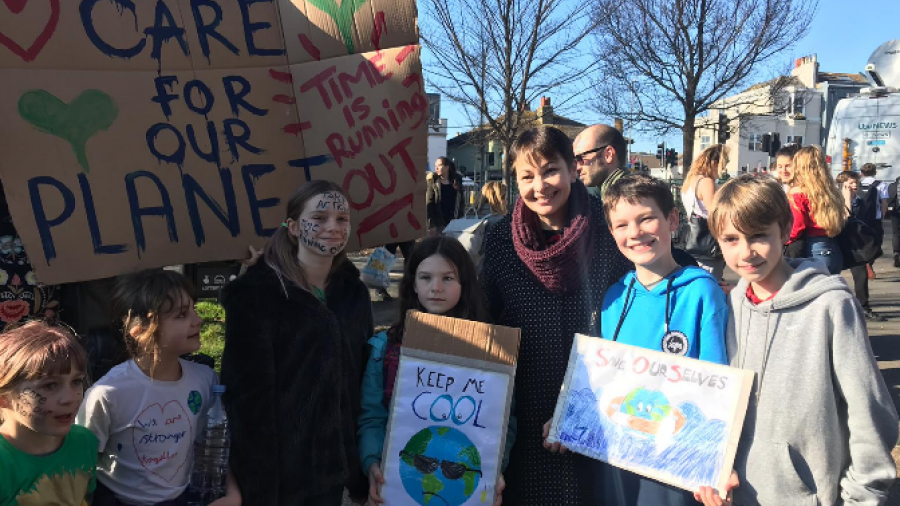 The Brighton Pavilion MP will address students at the city’s clock tower as they take part in a nationwide strike for climate action. Thousands of young people across the UK are expected to refuse to attend school in protest at the Government’s failure to slash emissions in line with targets to keep global temperature rises to 1.5 degrees.

The movement was inspired by Greta Thunberg, a 16-year-old Swedish activist who went on school strike last August. Tens of thousands of children have since refused to attend school in similar protests in Australia, the Netherlands and Belgium.

The students are demanding:

1. The Government declare a climate emergency and prioritise the protection of life on Earth, taking active steps to achieve climate justice.

2. The national curriculum is reformed to address the ecological crisis as an educational priority.

3. The Government communicate the severity of the ecological crisis and the necessity to act now to the general public.

4. The Government recognise that young people have the biggest stake in our future, by incorporating youth views into policy making and bringing the voting age down to 16.

Caroline Lucas MP said: "Our children recognise that this is a climate emergency. They are striking this week because they know we cannot carry on as normal.

“Teachers work hard to prepare students for their future – but right now that future is at serious risk. It’s inspiring that this generation is already taking action to build a fairer, safer world. Those in government now must follow their lead.”

University of Sussex student Roseanne Steffen said: "We are striking because the climate crisis is not a distant image of the future, it is an already lived reality for many people around the world. Here in Brighton, we want to use the recent enthusiasm for youth climate activism to inform people on the intersectional nature of the climate crisis, by foregrounding the ‘climate justice’ approach.

"We are drawing on the incredible expertise not only at University of Sussex, but also in the wider student population and NGOs such as Global Justice Now. We will be featuring speakers on topics such as the impact of historical and contemporary colonialism and why it has led the global south to bear the greatest burden of carbon emissions.

"This crisis is not a single issue one. Thus, it must be tackled in conjunction with other struggles such as the fight against spiralling economic inequality worldwide. We are looking to build local awareness of the importance of a sustained, internationally connected effort to mitigate the worst effects of climate change."

More than 100 students in Brighton are expected to join the protest at the clock tower on Friday, where Caroline will speak at 12.30pm.