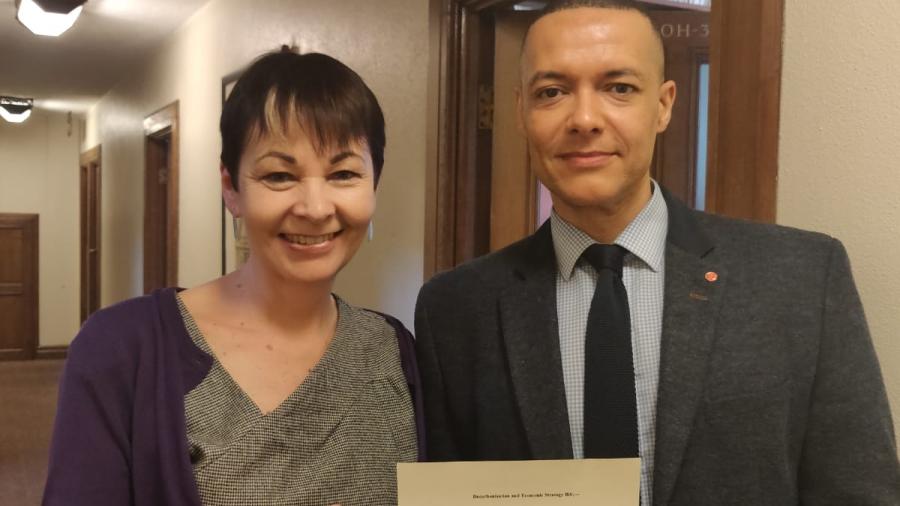 The 'Decarbonisation and Economic Strategy Bill' would place duties on ministers to introduce a radical 10-year strategy for public investment designed to decarbonise the economy and eradicate inequality. It would require ministers to empower communities and workers to transition from high-carbon to low and zero-carbon industries, introduce stricter environmental regulations and protect and restore natural habitats.

Caroline co-founded the UK's Green New Deal Group 10 years ago, and US Senator Alexandria Ocasio-Cortez has recently reinvigorated the idea in the US. It takes its inspiration from Roosevelt’s New Deal of the 1930s, which used massive investment in jobs and infrastructure to pull the US out of the Great Depression.

A Green New Deal would involve huge investment in clean energy, warm homes and affordable public transport – delivering a decent, well-paid job to everyone who wants one, and tackling climate change.

Labour members recently launched a grassroots campaign called Labour for a Green New Deal, to encourage the party to adopt a similar policy.

Today will be the first time a Bill designed to enact a Green New Deal has come before Parliament, and it is expected to gain cross-party support.

It comes in the wake of this month's global school strikes, which saw more than 50,000 young people join protests across the UK calling for action to tackle climate breakdown.

Green Party MP Caroline Lucas said: "Our climate and our society are in crisis – but our Government is failing to act. It is now clear that we need a bold and radical plan to fight the climate crisis at the scale that scientists say is necessary. To do that we need to transform our economy and society at the speed necessary to prevent climate breakdown. We need to do what is required of us – not simply what is seen as politically possible.

"Young people understand the scale of the economic transformation we need to secure our futures. It's time the Government woke up to the climate emergency and the UK's grotesque levels of inequality and enacted a Green New Deal."

Labour's Shadow Treasury Minister for Sustainable Economics, Clive Lewis, said: “The physics is clear. We must cut carbon emissions by 50 per cent, within a decade, to avoid climate breakdown. As climate strikers warn us, the planet will not wait.

"This Bill sets a timetable that makes government, workers and communities the drivers of change, not the inheritors of chaos.”