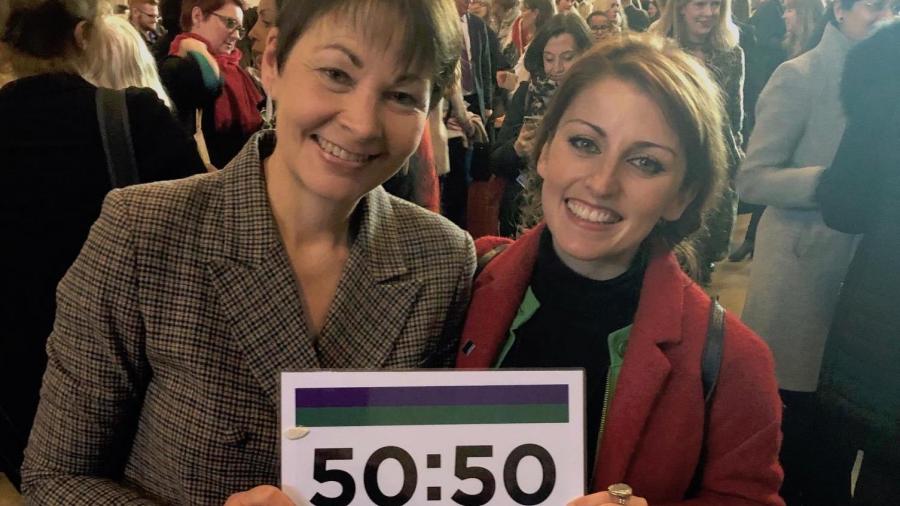 Brighton resident Elaine Ortiz – founder of the Hummingbird Project to support refugees – spent yesterday in Parliament with Caroline Lucas MP as part of the ‘Ask Her to Stand’ initiative to encourage more women to enter politics.

Elaine is a campaigner for human rights, race equality and refugee welfare. She has worked for many years in child protection for organisations such as the NSPCC Child Protection Helpline, for Women’s Aid Refuges and as a rape crisis worker.

In 2015 she set up the Hummingbird Project, a volunteer-led initiative which worked directly with refugees in camps in Calais and Dunkirk. Caroline visited Calais with Elaine to see the work they were doing there first-hand. Hummingbird is now a registered charity running a number of projects and initiatives to support refugees in Brighton and Hove.

Elaine spent the day attending meetings and events with Caroline, learning about how Parliament works, and even being interviewed on Radio 5 Live.

The day was organised by 50:50 Parliament to celebrate the centenary of the Qualification of Women Act which allowed women to stand as political candidates for the first time.

Men currently outnumber women by more than 2:1 in the Commons. Only 33 per cent of local councillors in the UK are women. In the century since women were first able to stand for election, only 491 women have gained seats at Westminster, compared with 4,503 men. In the 2017, 12 extra women were elected to Parliament. At this rate, campaigners say, it will take another half century to achieve a gender-balanced Parliament.

Caroline Lucas MP said: “Elaine is exactly the sort of person we desperately need in politics – someone with hands-on experience of working with the most disadvantaged people in our society.

“It’s shocking that in 2018, there are still two men for every woman in Parliament. When the views and experiences of half the population aren’t being represented, it should come as no surprise that policies that hit women hardest – like austerity and the Government’s disastrous Brexit – become law.

“I hope the day inspires more women like Elaine to stand for election so we can all benefit from a democracy where everyone is represented.”

Elaine Ortiz said: “Politics can feel very male-dominated. As a working class woman I don’t feel properly represented in Parliament – and until today I wouldn’t have known where to start with getting involved.

“Spending the day with Caroline gave me a great glimpse into the life of an MP and has given me the motivation to help make politics more accessible.”