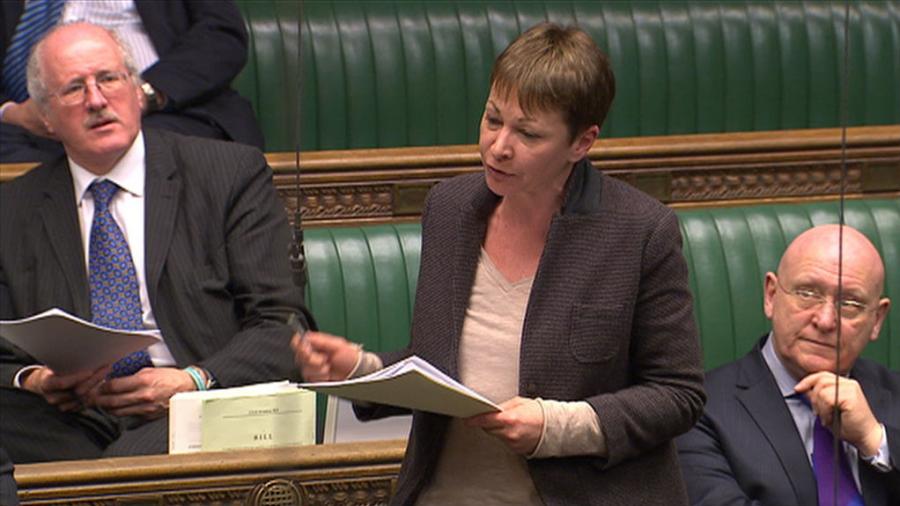 Caroline: Divest Parliamentary Pensions
Tuesday, October 21, 2014
The value invested in fossil fuels is not in the public domain, and Caroline has called for the information to be disclosed.
Caroline has today called for the divestment of the Parliamentary Pension Scheme from fossil fuels.
The assets of the Parliamentary Pension Fund amount to almost half a billion pounds (£487.051m)
Caroline has written, in a joint letter with 14 other MPs and peers, to the Parliamentary Contributory Pension Fund (PCPF) setting out concerns about the parliamentary pension fund investing in fossil fuels, and calling for action on climate change and carbon risk.
The value invested in fossil fuels is not in the public domain, and Caroline has called for the information to be disclosed.
Divestment is taking off across the UK, with institutions including Glasgow University, British Medical Association and Oxford City Council moving their investments out of oil, coal and gas, and into renewable energy and low carbon infrastructure.
The Rockefeller dynasty – built on oil and coal – is not only pulling vast sums of money out of fossil fuels, but funnelling it into clean energy.
A growing movement of hundreds of institutions worldwide that have chosen to divest an estimated total of £31bn from dirty fossil fuels already. “Now is the time to join them,” said Caroline, adding that she was inspired by key institutions in her own constituency, including the decision of Brighthelm Church and Community Centre to withdraw investments from polluting industries earlier this year and Sussex University’s ongoing campaign for ethical investment.
Caroline, who is vice chair of the All Party Parliamentary Group on Responsible Investment, said: “We urgently need more money flowing in the right direction – to tackle problems like resource scarcity, climate change and fuel poverty. Globally, we already have around five times more fossil fuels than we can afford to burn if we’re to avoid catastrophic climate change. We need action to ensure that, where the parliamentary pension scheme is investing in the energy sector, it’s supporting renewable energy, efficiency and other low carbon infrastructure - not oil, coal and gas.
“As MPs, we need to put our money where our mouth is. Parliament should be leading the way on this issue, not sheepishly lagging behind.”
Setting out her support for the Good Money Week campaign for the Government to produce a Sustainable Spending Scorecard, she added: “Ethical finance is crucial and economically beneficial. Transparency in government spending is also key: it’s absolutely right that the public can see when and how their taxes are being used to work towards a healthier, happier society – and when they’re not.”
Today Caroline spoke at an event in Parliament on the issue, organised by the UK Sustainable Investment and Finance Association (UKSIF) as part of Good Money Week.
Fergus Moffatt, Programme Director and Head of Public Policy at UKSIF said:
“It is only right that those in charge of governance take Environmental, Social and Governance (ESG) issues seriously. The Parliamentary Contributory Pension Fund (PCPF) should consider the process by which it assesses risk over the long-term; ESG considerations are intrinsically linked to the value of an investment. It is important Parliament sets an example on this issue and starts to think about its pension fund, and Good Money Week (19 to 25 October) is the perfect opportunity to start the process.”
Louise Rouse, director of campaigns and engagement at ShareAction, the charity that promotes Responsible Investment by pension funds and fund managers, said:
"With millions of Britons being automatically enrolled in pensions, it's vital that those managing our pension savings take steps to address the serious financial risks posed by climate change. Because of a lack of transparency, pension savers often don't know that their money is invested in companies which are fuelling climate change and don't think about the impact climate change might have on their retirement pot.  Pension funds have a responsibility to savers to demonstrate they understand these risks and are taking action to address them.  By signing this letter, MPs today join thousands of pension savers who have now joined ShareAction's Green Light campaign to demand that the people managing our pensions fulfill this responsibility."
Notes: